Obviously I love Olivia de Havilland (otherwise I wouldn't be co-hosting a blogathon for her in a week and a half). Ever since I saw her in The Adventures of Robin Hood when I was little I thought her to be one of the most beautiful women I had ever seen. When I was older and saw her in They Died with Their Boots on, I discovered just how fantastic she is as an actress. Since then I have watched several of her films and inevitably have come up with some favorites. Here they are:

I am very excited that Olivia is TCM's Star of the Month for July. I particularly want to see Four's a Crowd and Raffles. I've been freeing up my dvr in anticipation. Which films are you looking forward to seeing? Have you signed up for the blogathon? It's not too late!! 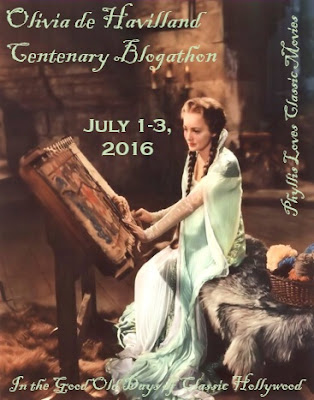