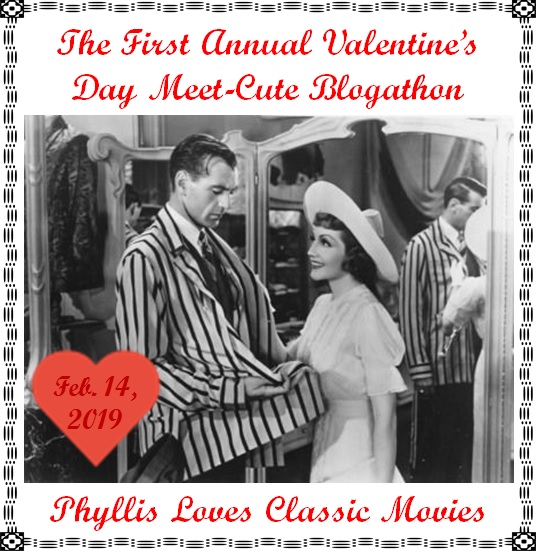 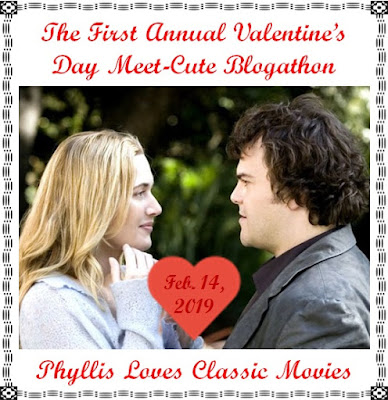 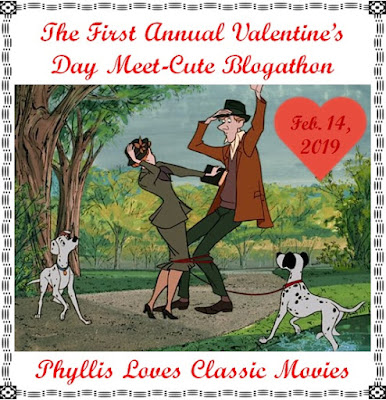 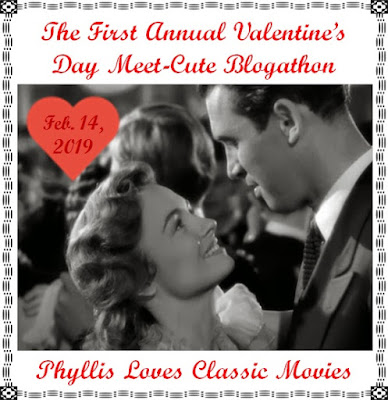 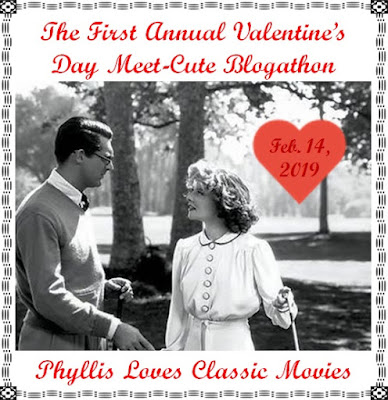 If you have trouble commenting you can DM me on twitter (@solidmoonlight) or send me an email (solidmoonlight@gmail.com).
Posted by Phyl at 11:19 AM 39 comments: 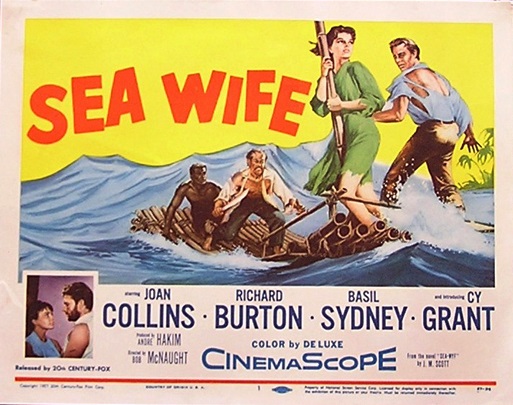 I started this post nearly two years ago, typing the beginning here and writing the rest on paper as I watched the film. But I never polished it up and posted it so when Realweedgiemidget Reviews announced the Regaling about Richard Burton Blogathon I thought it would be the perfect time to get the posted! Unfortunately I couldn't find my notes until I did some serious cleaning today which is why this post is a day late. Sorry Gill!

The other day (3-8-17) I watched Sea Wife (1957), which aired on TCM the night after Robert Osborne passed away to join the countless stars he loved and admired so much. After tearfully watching a message from Ben Mankiewicz before the film started, and the TCM Remembers video, the opening credits of Sea Wife began.

The opening song, "I'll Find You" sung by David Whitfield over a background of sparkling water, reminded me very much of a 1960s live-action Disney film. You can listen to the song below.


Starring Richard Burton (TCM's Star of the Month in March 2017) and Joan Collins, the film is based on the book Sea-Wyf and Biscuit by J. M. Scott. We meet Biscuit (Burton) en route to ?? by ship. He is contemplative (as only Burton can be) and after starring off into the distance for a few moments, he makes his way to telegraph office where he places an ad in the personal columns. He continues this upon his arrival at every major newspaper. All of them are addressed simply to "Sea Wife."

He finally receives a reply, from a patient in a rest home. Upon his arrival at the grand house and grounds he is met, not by the person he was expecting, but a wheelchair bound older man. They begin to talk and the old man becomes excited about some past event. We fade in time to a crowded boat in Singapore. The year, 1942.

It is the first night at sea. The boat, carrying well beyond it's weight limit of men, women, and children, is torpedoed by a Japanese sub. Panic ensues with people screaming and a fire raging in the engine room. A young girl clings to a nun in a black habit (Joan Collins) who, in order for the child to stay in the lifeboat, tosses off her habit to reveal a simple white shift. There is a bit of a "Titanic" moment as there aren't enough lifeboats to go around, one of them capsizing, spilling its' load into the sea. Some inflatable rafts are launched and the nun and a wounded Biscuit, who was also a passenger, climb onto an empty raft. Together they rescue and older man from the water - the same man we met at the rest home - and watch as their ship erupts in flames. As they are paddling away from the turbulence another passenger climbs aboard, a black man who (in an unfortunate stereotype found in many films) gazes a little too long at the nun who looks very appealing despite her short wet hair and oversized white gown (it helps when your eye shadow and false eyelashes make it through the ordeal). 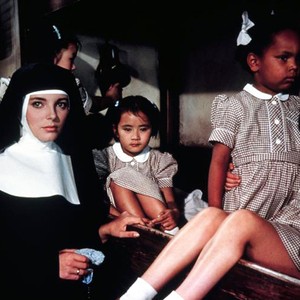 The four drifters, rather than reveal their true identities, come up with nicknames for one another. The older man is called Bulldog, the black man becomes No. 4 as he was the fourth passenger, and the aforementioned Biscuit who is in charge of the rations: biscuits. They take turns watching, with Bulldog and the nun having a conversation about God when he catches her praying.

It is No. 4 who gives the nun her nickname  - he was the only one to see her onboard in her habit. As the three men watch her swimming No. 4 calls her "Sea Wife," another name for a mermaid.

After only two days adrift they are already halfway through their rations.  Bulldog begins talking about drinking blood to quench their thirst, causing tempers to flare. Their argument is cut short when Sea Wife hears something in the fog. They paddle toward the sound and come upon a submarine! Unfortunately it's Japanese. They want to know if there are any other American warships at sea. When the drifters declare they know nothing, the Japs refuse to give them food or water. They won't even take them aboard as prisoners, preferring to let them die at sea. Sea Wife begs for mercy however and they are given some provisions before the submarine slips back into the dark waters.

The next night, Biscuit gets poetic (What did you expect? It's Burton!). He is interrupted when their little raft is almost upset by a passing sub, knocking their provisions into the water! In the dark they are unable to retrieve it. The following morning they paddle along dejectedly. Some pelicans appear overhead and, when one lands in the water, the men kill it, upsetting Sea Wife who knows that the sight of the pelican means land is nearby.

Later a rainstorm comes up, at first quenching their thirst but then turning into a strong gale that tossed the raft about in the crashing waves. The sun finally comes back out however with everyone alive and land in sight. They paddle eagerly toward the shore but are carried toward some rocks, ripping their raft in the process.

After bathing in the fresh water and eating some fruit, Biscuit and Bulldog set out to do a little exploring and try, unsuccessfully, to build a structure. While Sea Wife and Biscuit are trying to catch fish, he finally asks her what her real name is. She evades the question, saying, "I'm not a real person here. None of us are. I think it's better if we keep the names we have." 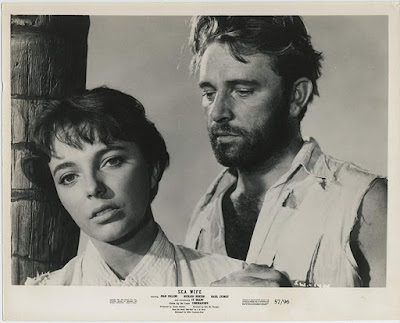 Tempers flare again when No. 4 finds a machete and refuses to let anyone else touch it. He also privately questions why Sea Wife hasn't revealed her true identity to the other men, especially Biscuit who clearly has feelings for her.

They begin to work on a bamboo raft, as Biscuit thinks he has spotted land some 15 miles away. Once completed, they wait for the proper time to set sail. Biscuit accuses Sea Wife of running away from life and professes his love for her. Rather than reveal that she is a nun she simply says that she is promised to someone else. 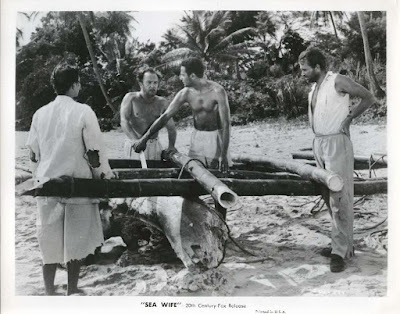 Bulldog hides No. 4's machete and, while he's looking for it, tricks the others onto the raft and pushed it out to sea, leaving No. 4 behind. He knocks Biscuit out and reveals that he has the knife on board. No. 4 tries to swim out to the raft but is attacked and killed by a shark. Bulldog isn't even sorry, saying they couldn't have a knife, a girl, and a negro all on the same raft. They can have two, but not three (this is the part where I wish Sea Wife would push his racist you-know-what overboard but, being a nun she doesn't).

Biscuit is unconscious all that night and into the next day, when Sea Wife spots a ship. As dramatic music swells in the background we are suddenly back at the rest home where Biscuit is told the shocking news that Sea Wife died aboard the ship. But, as he walks away from the rest home, he passes two nuns. After he has passed, one of them turns around. She is Sea Wife. "No one looks at the face of a nun," she remarks to her companion, and they continue on their way. 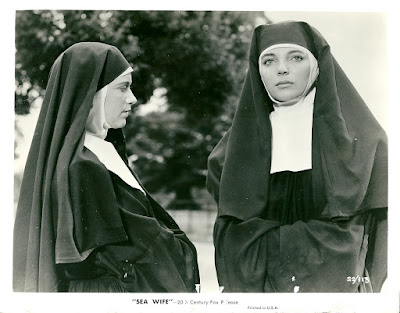 This post is part of the Regaling about Richard Burton Blogathon hosted by Realweegiemidget Reviews. Check out everyone else's contributions by clicking the links below! 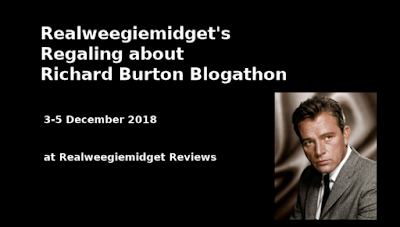 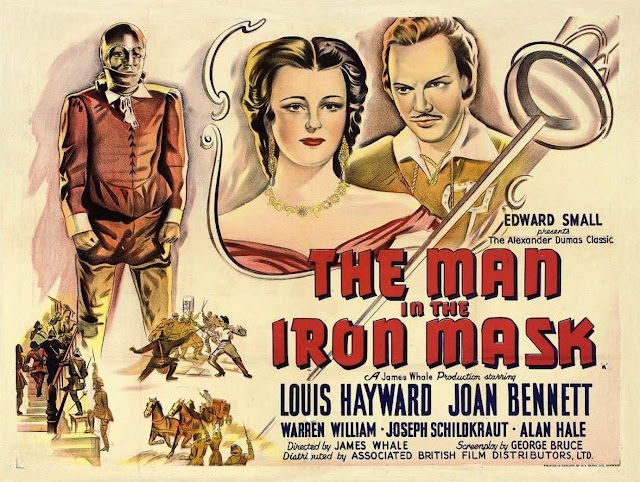 This month was pretty good movie-wise. I caught some really interesting ones that aren't well known. I also finally got to see Journey to Italy. TCM showed it another time but it was dubbed in Italian with English subtitles and it was too hard to watch Ingrid Bergman and George Sanders not speaking in their distinctive voices. I also introduced the family to The Trouble with Harry. It was a hit :)
Least Favorite Movie: Didn't have any.

Favorite Movie: Of course I enjoyed Caftan Woman's recommendation of Heaven Only Knows. I wasn't expecting it to make me cry though! 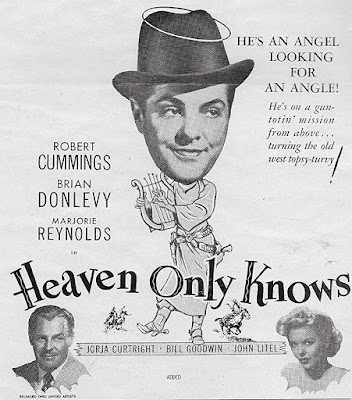