Watching So Goes My Love (1946) for an old favorite actress - Myrna Loy, introduced me to a new favorite actor - Don Ameche. 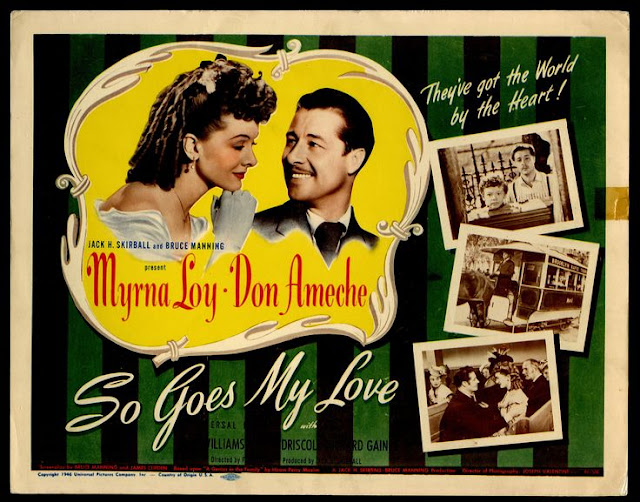 So Goes My Love is about a country girl (Loy) who goes to the city to find and marry a rich man (whether she loves him or not) and ends up marrying a poor, eccentric inventor (Ameche). With her by his side however, he becomes successful and she gets the rich husband, the big house, AND love. 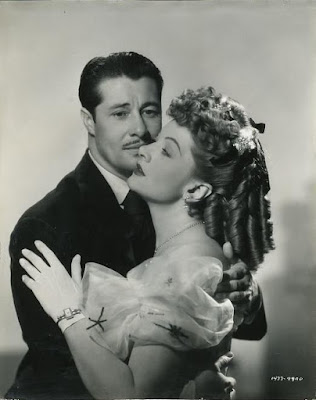 Though Loy's performance is flawless as always, it is Ameche who really steals the film. His solemn-faced delivery paired with ridiculous actions made this film a lot of fun to watch. My favorite scene is near the beginning: Ameche and Loy are riding the streetcar (their characters have not yet been introduced). As they are passing a church where a wedding has just clearly taken place, Ameche jumps off the streetcar, runs over to join the wedding crowd, throws rice on the newlyweds, and runs to jump back on the streetcar - all without changing his facial expression. When Loy queries, "Friends of yours?" he replies, "No, I just like weddings." (correct me if I quoted this wrong, I don't own this movie so I couldn't double-check). 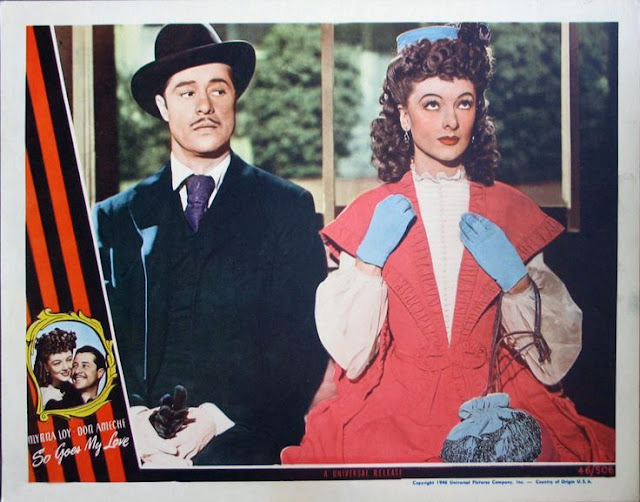 Another favorite scene is when Loy arrives at her cousins house and meets her friends. They ask her why she is here and she replies that she has come to the city to find a rich husband. One of the woman says to her teenage daughter "Shocking! Daughter, cover your ears!"

Then there's this hilarious scene when Ameche informs Loy he is definitely NOT the man for her.

The scene at the party, with Ameche shaking his head at Loy to let her know which of her dancing partners don't fit her requirements, and the wedding scene are also hilarious. I could go on and on but you should really just watch it for yourself. You can also read the full plot synopsis on the TCM website here. 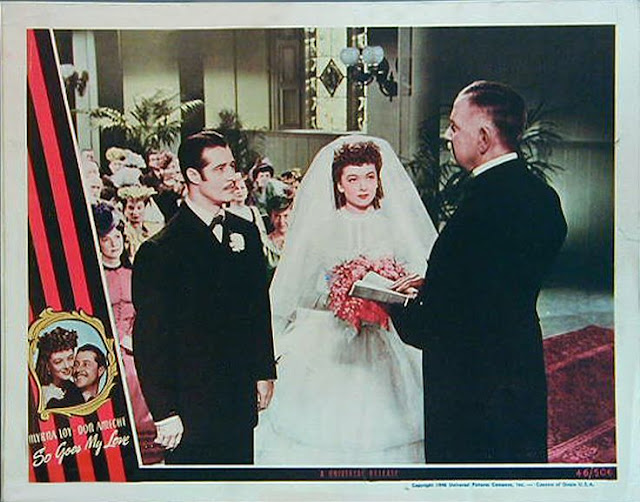 The Universal International backlot was used for the wagon ride scene. The two houses used in the film were constructed on stage 12. In 1950, the stock units from the sound stage sets were reconstructed on the new colonial street. The "Maxim house" was used in the movie " One Desire" (1955) and the "Allison Home" used in the movie "Harvey" (1950) In 1964 Universal studios tour guides called the sets the "Munster House" (Maxim house) and the "Harvey house" . Today the sets are located on Wisteria Lane - 4349 Wisteria Lane (Allison Home) - 4351 Wisteria Lane (Maxim house). ~ source 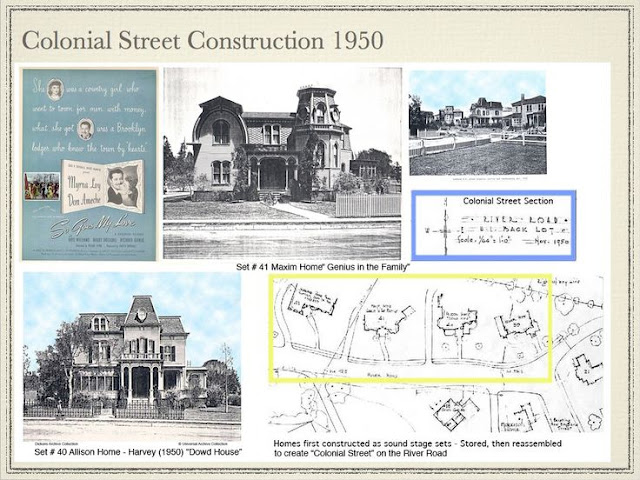 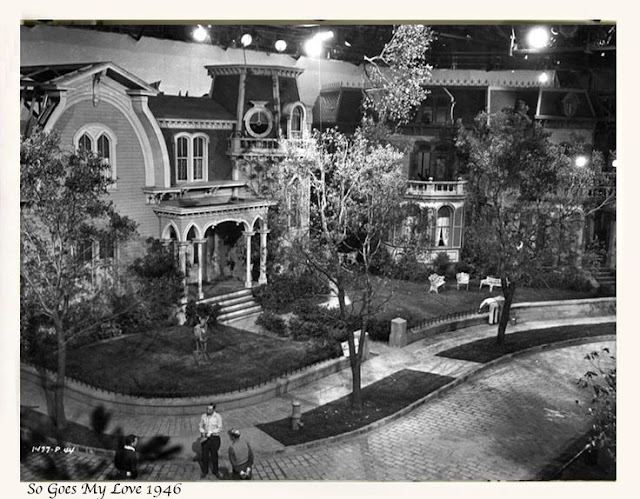 Pictures throughout the post used with permission by Dennis Dickens Universal Stonecutter. You can see lots of other great photos here and on his Pinterest Board. He also has several other boards devoted to Universal Studios and their films.

Bobby Driscoll, who plays Percy, later did the voice for Disney's Peter Pan (1953). Wish I would have known that when I watched it...

While looking for information for this post I discovered So Goes My Love is a fanciful biopic of  inventor Hiram Maxim (1840-1916) - which explains the odd ending. He invented the first portable, automatic machine gun, and held patents on the mousetrap and hair-curling irons (which is in the film-see clip above). In 1867 he married Jane Budden. His son, Hiram Percy (1869-1936), was an automotive pioneer and co-founder of ARRL (American Radio Relay League). Hiram and Jane also had two daughters: Florence and Adelaide. ~ source 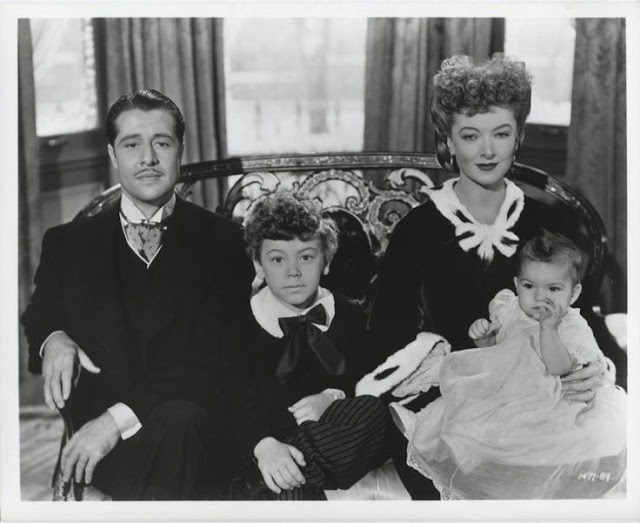 The film is based on the book A Genius in the Family by Maxim's son, Percy. The description on Amazon reads: "This book contains Hiram Percy Maxim's memories of growing up with his brilliant but eccentric father, Hiram Stephens Maxim, scientist, engineer and inventor of the famous Maxim gun. Sometimes poignant and often very funny, these anecdotes are delightfully told and give a fascinating picture of 19th Century life in one extraordinary American family." It can be purchased on Amazon for $19.99. There is also a copy on Thriftbooks (a fantastic site for used books) for $3.59 with free shipping on orders over $10. 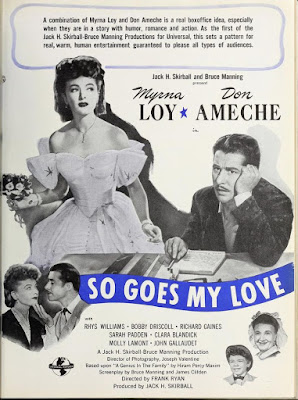 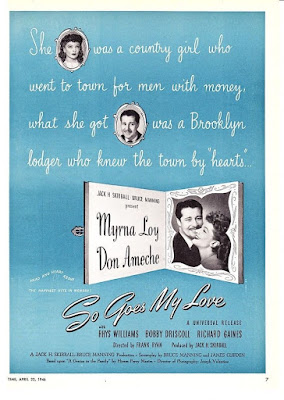 ><><><><><><><><
This post is part of the Universal Blogathon hosted by Silver Scenes. Be sure and check out all of the other great posts on films and stars from Universal Studios. 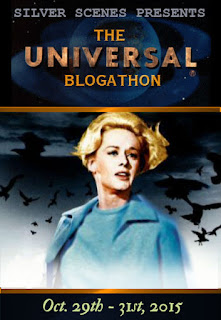 Also, look for my post of films to watch on TCM in November this evening!
Posted by Phyl at 10:37 PM