Asking a serious Classic Movie fan to name the five movie stars they love the most is a serious question indeed. But that is exactly what the Classic Film and TV Café is asking for this years' National Classic Movie Day Blogathon. With such previous hard-hitting questions as your favorite film and what five movies you would take with you on a deserted island, this question is also not an easy one to answer.

I could very easily rattle off my top favorite stars: John Wayne, William Powell, Cary Grant, Olivia de Havilland, and Myrna Loy, all movie stars whose films I love the most. But that's not quite what this blogathon is about. This blogathon is about the movie stars we LOVE. That is the key word here. And so, here are the five movie stars that I LOVE the most. I may not love all of their films, but there is something about each and every one of these stars that makes me love them above all the rest. 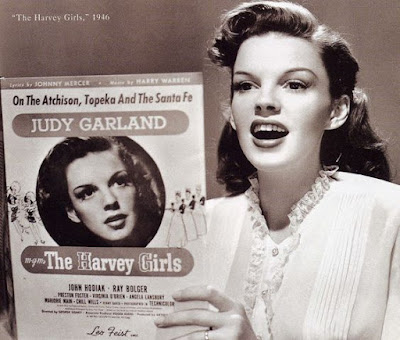 My first idol. For a lot of Classic Movie Fans, it was The Wizard of Oz that started it all. While I don't know exactly what Classic Movie I saw first, growing up on John Wayne, Maureen O'Hara, Bing Crosby, Cary Grant, and live-action Disney films for the 60s, I do know that I have always loved Judy Garland as Dorothy. While it was mainly the red shoes, I loved the magic of the film and most of all, the song "Somewhere Over the Rainbow." I have always tried to emulate her singing style and nothing makes me happier than belting out "The Trolley Song" or "On the Atchison, Topeka and the Santa Fe" as I'm driving somewhere. Judy is also the only one who can make me cry when she gets that catch in her voice. I wish so badly that I could go back in time and protect her from the people who made her life miserable and tell her just how amazing she was and how much she is loved by so many people.

Other posts on Judy: The Clock (1945) & "Are you a good witch...". Also, look for my post on my Wizard of Oz collection in June for the Judy Garland Blogathon. 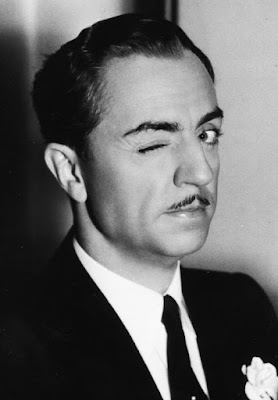 While I have always enjoyed Classic Movies - I didn't watch anything else growing up - it was William Powell who made me obsessed with them. A few months before I started this blog, and shortly after I finished college, I re-watched the Thin Man movies. For some reason they hadn't really affected me when I watched them in my teens, but this time I couldn't get over the amazing chemistry between William Powell and Myrna Loy. Over the next year, I watched as many of Powell's films as I could, some on YouTube and several on TCM on his birthday. He was brilliant in every single one of them. By watching his films I discovered more great stars which led me to discover even more great stars. He was also one of the reasons I ended up starting a blog, so that I could share my discoveries with others.

Favorite Films: All of them, but especially the ones with Loy. Also Mister Roberts (1955). 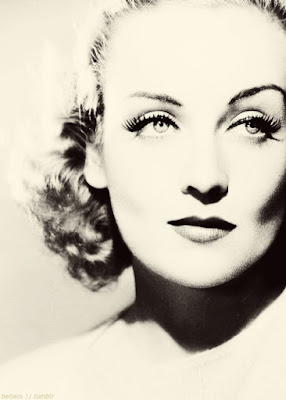 Carole Lombard was another re-discovery. I had seen her in My Man Godfrey when I was a teen, but her zany character was a little to much for me to handle. But in the course of watching Powell's films I gave this one a re-watch and enjoyed it much better. I wish I could remember what films of hers I saw next but all I remember is that I quickly came to love this beautiful blond who wasn't afraid to act silly. Mr. and Mrs. Smith and To Be or Not to Be were early favorites. I was devastated when I learned of her untimely death in a plane crash in 1942 and if there was one thing in history I could change that would be it. 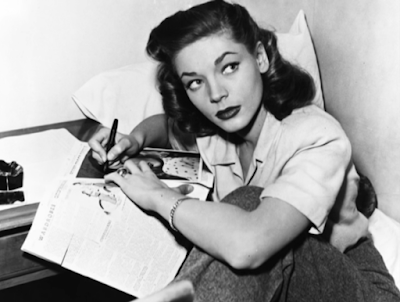 I discovered Bacall through a special feature on my You've Got Mail (1998) dvd titled "You've Got Chemistry." Not only did it re-introduce me to Powell and Loy, it also introduced me to two couples I didn't know: Errol Flynn & Olivia de Havilland and Humphrey Bogart & Lauren Bacall (the other couples featured were Judy Garland & Mickey Rooney and of course Tom Hanks and Meg Ryan). Bogie I knew but Bacall was new to me. When I saw the clips from To Have and Have Not (1944) I knew this was a film I had to see. I quickly acquired the four films Bogie and Bacall made together from my library and not long after bought the boxed set. For quite some time To Have... was my favorite movie. I read Bacall's autobiography (which I highly recommend) and wrote a post about her amazing eyebrows (seriously, what I wouldn't give to have them). I was so sad when, not long after I had discovered her, she passed away. It was then that I wrote one of my best blog posts, a full year before I started this blog dedicated especially to my newfound passion of Classic Movies (I liked it so much I used it again for the Lauren Bacall Blogathon two years later).

Whenever compiling a list of favorites, the most difficult choice is always the last one because you realize how many persons or things you are having to leave off. Do I pick lifetime favorites John Wayne or Cary Grant? Actors I've had major crushes on like Paul Newman, Aldo Ray, Cliff Robertson, Michael Callan? Ones I've discovered more recently like Olivia de Havilland, Jean Simmons, Dorothy McGuire? If this wasn't Classic Movie Day I'd just make things easy and pick Chris Pine, but since it is my final choice is going to be...

If you've seen Cat People (1942) you will understand this choice. If you haven't... go watch it. How could I not love her? She is so adorable it's impossible not to love her. I can't even put into words why I love her so much ♥♥♥

Favorite Films: I've only seen four and out of all of them the only one that really good is Cat People (1942).

When listing actors or actresses whose movies I couldn't live without the list is mostly actors, so it's funny that it's mostly actresses that I have the most devotion to. I guess it's because I admire these women so much and wish I could be like them. It is these women who inspire me by their strength and beauty to work toward my goals in life. And it is William Powell that I use as a standard in judging men, which explains why I'm still single... ;)

Finally, go check out the other posts and see what five stars other bloggers have chosen! Maybe you'll discover some new ones!
Posted by Phyl at 12:57 AM