A silent film. A woman playing the piano. A man cranking the film. An enraptured young woman. Upstairs, a limping young woman, an impending storm, and a closet full of dresses. Behind the dresses? An eye! The limping girl is strangled! The piano continues to play.

So begins The Spiral Staircase (1945) starring Dorothy McGuire, Kent Smith, George Brent, Ethel Barrymore, and a few other familiar faces. We know from the moment the credits start that this is going to be a suspenseful film. The eerie music can mean nothing else as the notes slide up and down, immediately inducing a feeling of uneasiness. And when a murder happens before the first line is spoken, one can only wonder, how many others are going to die during its course? But back to the scene of the crime. 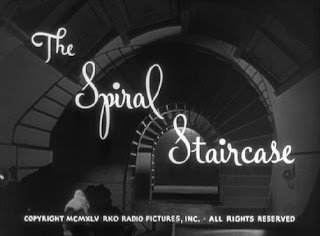 Downstairs at the hotel where the murder took place, the moviegoers are sent home and the town doctors come to inspect the body. Through their conversation it is established that the younger doctor, Dr. Parry (Kent Smith) is new to the town and gets on the nerves of old Dr. Harvey, who resents the fact that some of his patients prefer Dr. Parry. 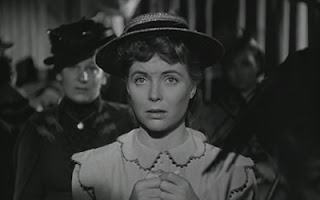 On his way home, Dr. Parry picks up the young woman (Dorothy McGuire) who had been watching the movie. We learn that her name is Helen, she works at the Warren house as a caretaker to old Mrs. Warren (Ethel Barrymore), and today is her day off. We also learn that she is a lost her voice several years ago. Dr. Parry believes that with a specialist's help, she could regain her voice back. It is apparent that Dr. Parry and Helen are attracted to one another. 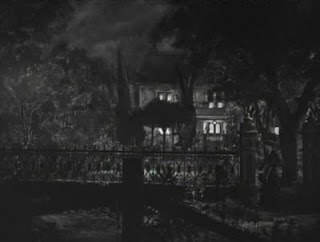 Before they reach the Warren house, a boy runs up to their buggy and says that his mother is sick. Dr. Parry lets Helen out and leaves with the boy. As Helen walks home through the woods, the tension builds along with the growing storm. A rustling noise turns out to be a rabbit. As she reaches the gate, the storm lets loose. She drops her key in a puddle and we suddenly see that she is not alone. A dark figure in a raincoat is watching her and starts to move towards her just as she finds her key and takes off running to the house. 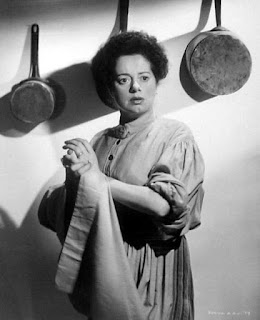 In the house, Helen heads to the kitchen to dry off before going upstairs to see Mrs. Warren. We learn from the housekeeper (Elsa Lancaster) that this murder was not the first and that the murderer targets only young disabled or disfigured women. The first had a scar on her face, the second was "simple-minded," and now this third girl who had a limp.

While going upstairs, Helen stops to look at her reflection in the mirror, moving her lips as if talking and then putting her hands to her silent throat. The camera backs away from the stairs and again that dark figure is watching her and his eye fills the screen. He sees Helen's reflection without a mouth, as she can't speak. This time he only watches, then disappears into the shadows. 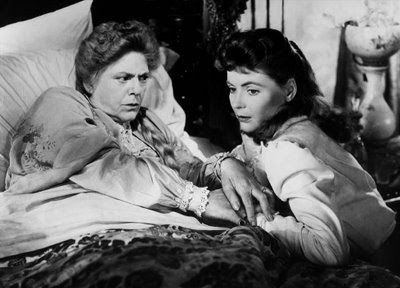 Up in Mrs. Warren's room, the atmosphere seems to be more relaxed. She appears to be asleep but as Helen builds up the fire, she opens her eyes and tell Helen to come to her. It is obvious that the invalid woman is very fond of Helen. Her little smile turns serious and she warns Helen that she isn't safe there and must leave tonight! 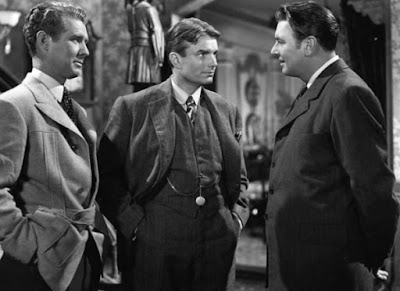 Downstairs we meet the rest of the family. There is Professor Albert Warren (George Brent), his secretary Blanche (Rhonda Fleming), and his younger step-brother Stephen. Stephen, who has just returned from a long stay in Paris, is a bit of a womanizer and turns his attentions to Blanche. The constable stops by and warns them to keep an eye on Helen, as they have traced the murderer to their vicinity. Albert tells Helen to stay in the house and trust no one. 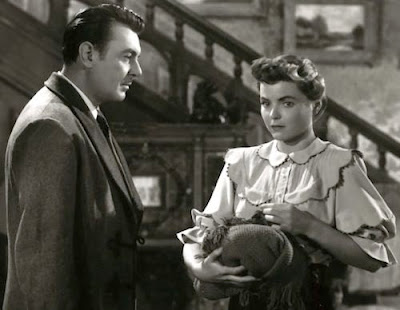 Back in Mrs. Warren's room, she has another attack. She expresses displeasure that Stephen has returned, as he always brings trouble with him. She also knows that there has been another murder, even though no one told her. When Dr. Parry arrives, Mrs. Warren tells him that she likes him because he is strong like her husband, not weak like her sons. She also tells him to take away Helen at once. The strain causes another attack. They send a man to town for some more ether, which they use as a stimulant. 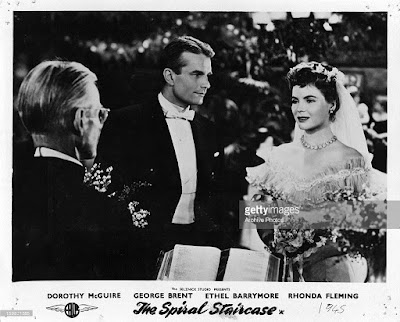 Downstairs, Dr. Parry tells Helen to pack her things and he will bring her to his mothers and then to Boston to see about restoring her voice. He also tells her that he has learned how she lost her voice from a visitor from her hometown that was at the home of his last patient. When Helen was a girl, she saw her house burn down with her parents still inside. Dr. Parry believes that if she stops blocking the memory out, her voice will return. After he leaves, Helen has a daydream where she and Dr. Parry are getting married. It is broken when she can't say the words "I do." 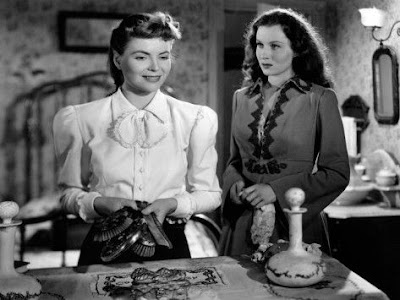 While she is packing, Blanche visits her in her room and decides to leave too, as she doesn't like being the cause of the animosity between Albert and Stephen (she had been Albert's girl first). She heads down to the basement to find her suitcase. She is frightened by someone she knows and her smile of relief turns to terror as whoever it was strangles her, her face and the murderer shrouded in darkness.

While all of this is taking place, Mrs. Warren tells Helen of a murder she saw many years ago, on the grounds of this very house. It was a simple-minded girl. A "tree" moved and threw her into the well. Mrs. Warren couldn't find a rope to save her. Then she says something strange: "You were that girl, Helen." Again she warns her to leave, or at least hide under the bed.

Helen then goes downstairs to find Blanche and finds her body. She now knows the murderer is in the house. Suddenly she hears someone behind her. It is Stephen. He tells her to go call Dr. Parry. Helen runs out and locks Stephen in, thinking he is the murderer. She rushes to the phone but when the operator asks for the number she can't say anything. Albert walks in and she writes down what has happened. He starts to take her upstairs to his step-mother's room but stops at the mirror. He reveals that he is the murderer. "There is no room in the whole world for imperfection." He explains his actions as disposing the weak that his father detested. "He would have admired me for what I'm doing." 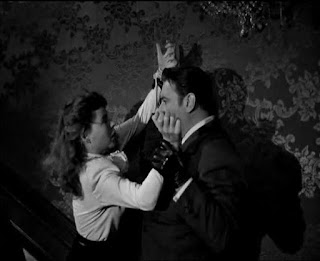 Helen manages to get away from him and locks herself in Mrs. Warren's room. She frantically begins searching for the gun that is usually on Mrs. Warren's nightstand. Then she sneaks back downstairs to let Stephen out but stops when she sees Albert's shoes at the bottom of the spiral staircase, where he was about to go tend to Stephen. She turns to go back up the stairs and who should be standing there with a gun but Mrs. Warren! Albert comes our of his hiding place and she shoots him multiple times, "ten years too late." Helen, for the first time, screams. She then goes and lets out Stephen, who rushes to his mother, who has now collapsed. "Forgive me, Stephen, I thought it was you. He always waited until you came home, so I thought it was you." Stephen again sends Helen upstairs to call Dr. Parry. This time she is able to speak. 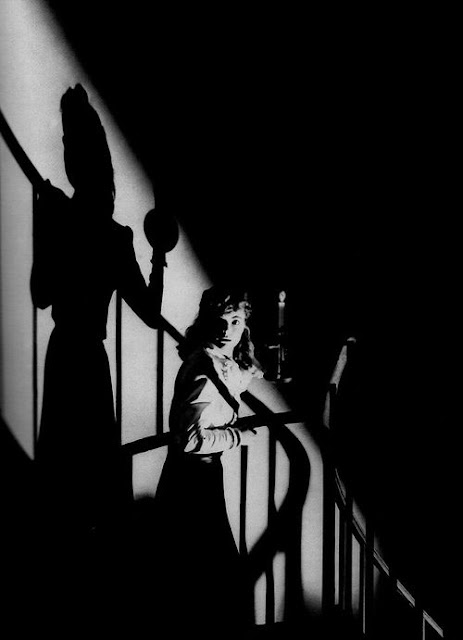 This post is part of The Second Annual Barrymore Trilogy Blogathon hosted by In the Good Old Days of Classic Hollywood. Be sure to read all of the other posts on this talented family! Also, be sure to check out my post on Ethel Barrymore's final film, Johnny Trouble (1957). 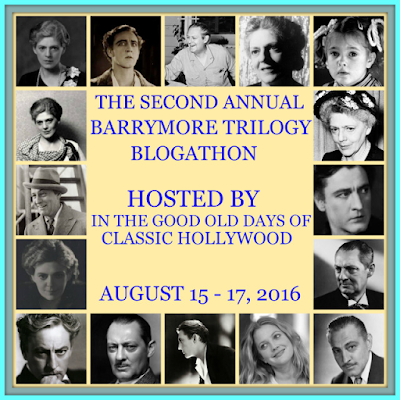