Today TCM's Summer Under the Stars is honoring British actress Jean Simmons and giving the chance to many of us to get to know this beautiful and talented actress. 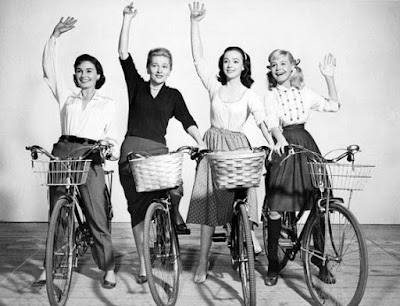 I first discovered Jean Simmons in Until They Sail (1957). I had come across this photo on the internet a few years before but it wasn't labeled. I only recognized Joan Fontaine and Sandra Dee. Then, during my "Paul Newman" phase, I caught Until They Sail on TCM and finally knew what the photo went to. Though I started watching it for Newman, it was Jean Simmons that caught my eye (not to mention her and Newman go great together).


The music in the background is annoying.

After that I watched The Robe (1953). Again, Jean Simmons gives a wonderful performance. Then I saw her in one of her earlier, British films So Long at the Fair (1950). I started watching it, I realized I already knew the plot, as it is used in an episode of Alfred Hitchcock Presents with Patricia Hitchcock in the lead role (and a mother instead of a brother).

Jean Simmons was born January 31, 1929 in London. A dancer, she got her start in movies at the age of 14, making her film debut in Give Us the Moon (1944) starring Margaret Lockwood. She appeared in fourteen films in the 1940s alone. 1950 started off with So Long at the Fair. She married actor Stewart Granger that same year. They had one daughter before divorcing in 1960. A few months later she married Richard Brooks. They also had a daughter.

This post is part of the 2016 TCM Summer Under the Stars Blogathon hosted by Journeys in Classic Film. Be sure to read all of the other posts on this months 31 Stars!
Posted by Phyl at 1:00 AM