Vanity Will Get You Somewhere ~ Reviewing Joseph Cotten's Autobigraphy

This is my second review for the Summer Reading Classic Film Book Challenge
over at Out of the Past. 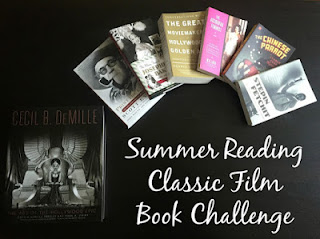 Once upon a time I read a book called Old Men Forget. It was the story of a man's life, written by the man, Alfred Duff Cooper, and I thought then, and I still do, that Old Men Forget is the best ever title for a book of autobiographical ramblings. That is the little forward to Joseph Cotten's 1987 autobiography, Vanity Will Get You Somewhere. It was a perfectly delightful read from start to finish. There were so many great stories and you really got a sense of what it was like to make films in the early 1940s. I also loved the style in which Cotten wrote. When his agent read the beginning of Cotten's book she said: "Jo, don't let anyone assist you with your writing. You have your own style; I like it, and I can sell it."

The book is divided into two parts. The first part was my favorite as it focused mostly on Cotten's early film career, which was a pretty extraordinary one I might add. His first film was Citizen Kane (1941), followed by The Magnificent Ambersons (1942), the early film noir Journey Into Fear (1943) Hitchcock's Shadow of a Doubt (1943), Gaslight (1944)... the list of classic films goes on.

The second half, while talking somewhat about his later films, focuses more on his marriage with his second wife (his first wife died) and of all the places they traveled to make his films. Cotten's writing is a perfect travelogue and you really learn what travel was like in the 60s and early 70s.


Read my birthday post for Joseph Cotten here. Read my post of his 1948 film, Portrait of Jennie, here.
Posted by Phyl at 8:52 PM