Today's post doesn't have anything to do with the actual star of todays Summer Under the Stars, Groucho Marx, but on an impersonation. 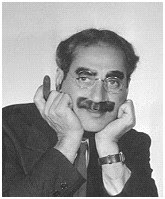 I've been watching M*A*S*H lately and in Season 1 Episode 6 (Yankee Doodle Doctor), Cap. Hawkeye Pierce, played by Alan Alda, does an impersonation of Groucho Marx that is spot on. First of all, there is a remarkable resemblance. 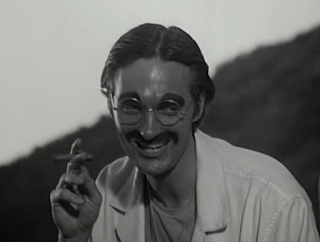 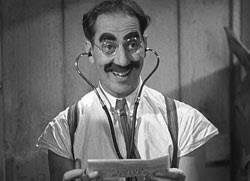 Trapper John, played by Wayne Rogers, has the blond, curly hair so he takes on the role of Harpo. In the episode, the personnel at the 4077th is supposed to make a video of what they do. However, the people who are in charge of filming stage it in a way that glorifies war, which Hawkeye is strongly opposed to. He destroys the original film and then promises to make up for it by filming it again himself. You can watch the clip below. The full episode can be found here.


This post is part of the month-long 2015 TCM Summer Under the Stars Blogathon hosted by Kristen at Journeys in Classic Film. Be sure and check back all month to see all the great posts!