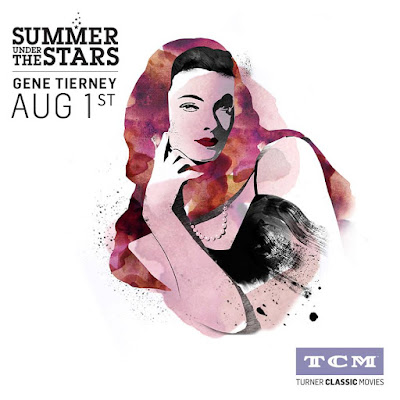 And I will never forget the first time I saw Laura. The film was breathtaking, suspenseful, haunting, captivating, and unlike any other movie I had seen up to that point. It was one of the few film noirs I had seen, and before I was really aware of what a 'film noir' was. The other 'noirish' films I had seen (but was too young to appreciate) were The Maltese Falcon and It's a Wonderful Life.


"I'll never forget the weekend Laura died." This first line, spoken by Waldo Lydecker (Clifton Webb), immediately grabs the viewer and draws them into the story. Nino Frank wrote in his influential 1946 essay "A New Kind of Police Drama: the Criminal Adventure," that Laura was a "charming character study of the furnishings and faces, a complicated narrative, a perverse writer who is prosaic but amusing, and foremost a detective with an emotional life" (Daily Doses from the online Film Noir class Into the Darkness). When watching the opening scene after reading that observation, a whole new level of the film is revealed. 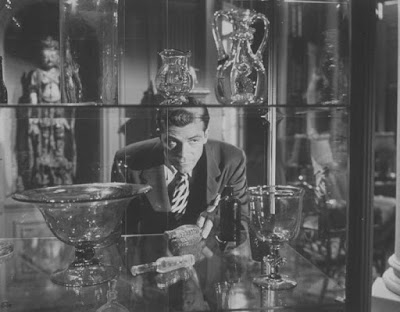 For example, in Some Visual Motifs of Film Noir, Janey Place and Lowell Peterson note that when detective Mark McPherson (Dana Andrews), peers through the glass case in Waldo Lydecker's apartment, the case becomes "at once constricting and symbolic of a percarious situation which threatens at any moment to shatter to the floor" (72). It was these qualities that made Laura unique and which have made the film the well-loved classic it is today.


Otto Preminger's 1944 Laura marks an important transition in film history. Visually it harks back to Hollywood's Golden Era, flooding with light elaborate sets and the glamorous stars they hold--but at crucial moments a noir vision bubbles up to artfully blemish this smooth façade. It is a classic love story--except that it hinges on forbidden fantasy and murder. It at once gives a coy nod to the parlor psychology of the "Thin Man" variety of mystery, and looks forward to the dark Hitchcockian psychological thriller. It is a Janus of a film, and it may be eternally debated whether its double vision signals an end or a beginning.

Laura, according to Gene Tierney, who plays the title character, has a "tricky plot: Laura, believed to be the victim of a murder, reappears to become a suspect" (Self Portrait, 113). 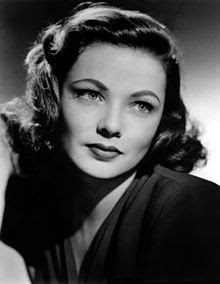 Gene Tierney described her most famous character as follows:


Laura dominated the story as a presence, felt but unseen, for half the movie. She was the victim of events she had not created and could not control. Laura was a woman of mystery and glamour, unattainable...

Laura is also the victim of male imaginings. Waldo Lydecker, who narrates the first half of the story, tells detective Mark McPherson (Dana Andrews) and the audience who this mysterious "Laura" is and how he came to know her. Hearing, and seeing, his story unfold, also reveals something about his character. To him Laura is his own creation, someone who would not and could not exist without him. He is obsessed with her to the point of madness.

McPherson, on the other hand, falls in love with Laura, not as a person, but as a portrait. She becomes his "feminine ideal." He too becomes obsessed with her. He sits in her apartment and stares at her portrait, goes through her personal belongings, reads her diary. When Laura becomes real, as well as a suspect, McPherson must try and put his feelings aside to get to the bottom of the mystery of who killed "Laura." 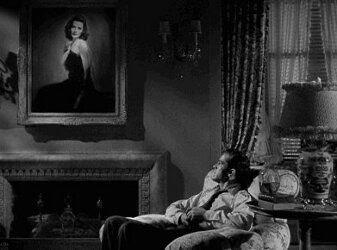 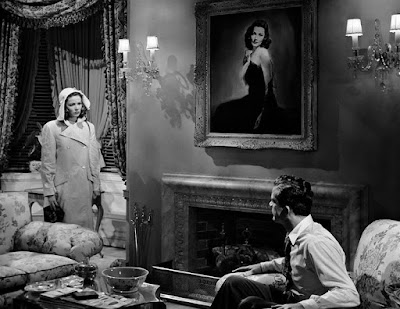 Gene Tierney was 24 years old at the time of filming. She had been in nearly a dozen movies, playing everything from "a frontier girl, an aristocrat, an Arabian, a Eurasian, a Polynesian, and a Chinese." This time she had a chance to play the title role, a leading lady. The part for Laura had already been turned down by both Jennifer Jones (who would get her own, less known "portrait" movie in 1948, Portrait of Jennie) and Hedy Lamarr and even Tierney was not impressed with the script at first. She was worried over the short amount of screen time her character had (it took Tierney only 18 days to shoot her scenes). Darryl Zanuck, the head of Fox Studios, encouraged her to take the rule, and Tierney agreed. "I was in no position to be picky," she wrote in her autobiograpy. "I had not made a picture in over a year. My husband was still in the army. The extent of our baby daughter's problems was not yet known. I needed to get back to work" (Self-Portrait, 114).

Tierney was also going through a difficult period in her life. She had been exposed to measles while pregnant and her baby daughter, Daria, was born with multiple problems: she was deaf, partially blind, and would never be able to speak properly. This crushed Tierney and led to mental problems later in her own life. Laura, however, launched her to stardom. 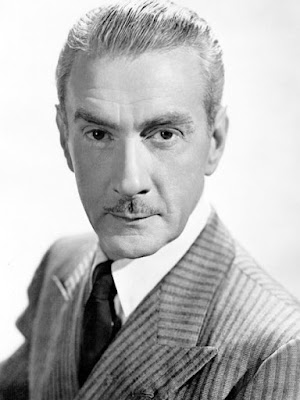 The role of Waldo Lydecker was played by Clifton Webb, who was a gamble considering he had only been in a few silent pictures and was a stage player. However, the role seemed to be made for him. It was a challenging role, he had long stretchs of dialogue and has to become a tragic figure to the audience. Tieney writes, "There was a wonderfully brittle edge to Clifton, his manner, his speech, the way he moved. Part of what came across on the screen, the impression of a man very tightly strung, was true in person. After we finished filming he checked himself into a sanitarium in New England. He came out rested and restored" (Self-Portrait, 115). Film Noir FAQ describes the character of Lydecker as "arch and affected" and "consistent." He is "almost entirely self-created; you get the sense that, growing up, he never was who or what he wished to be, and that he's spent his adult life cultivating something - somebody - better (3). 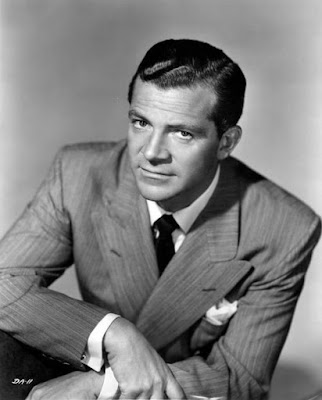 Mark McPherson is a different kind of detective than the pre-noir detectives (Philo Vance) and the hard-boiled figures of early noir (Sam Spade, Philip Marlowe). He starts out so confident and sure of himself and then falls in love with a painting and seems to lose focus of the job at hand. When Laura comes to life, he suddenly has to suspect this vision of murder instead. He has to be cruel to this beautiful creature and then protect her like he wanted to do all along. 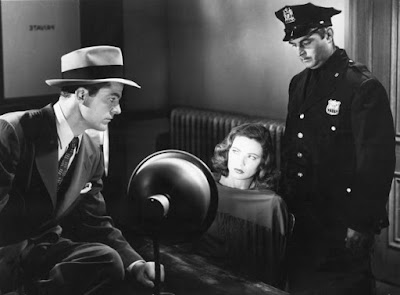 This was also a big role for Dana Andrews. He was not quite yet a leading man, though he had recently been noticed for his role in The Ox-Bow Incident (1943). Laura was his third film with Tierney.

The hauntingly beautiful portrait of Laura is the focus of the film at the beginning. It has its own life as it enchants those who look at it and causes people to forget the real Laura and see her as the Laura in the portrait. It became a "potent, poignant symbol of loss – one that would inspire an urgent, irrepressible desire to bring her back from the dead" (source). 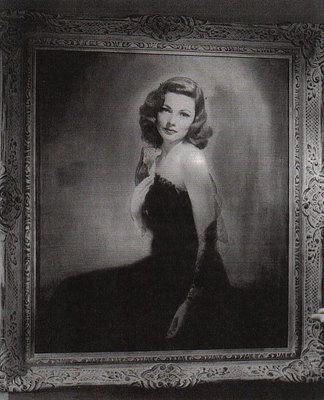 The real portrait used in the film was actually a photograph, taken by Frank Polony the studio photographer, that was then blown up and lightly brushed with paint to give it the ethereal look Preminger wanted. A painting was done by Azadia Mamoilian (also known as Azadia Newman) but Preminger was disatisfied with it. He was disastified with several things. Nearly everything went Preminger's way in the end.

The music of Laura is the second thing for which the film is most remembered. Preminger originally wanted to use "Sophisticated Lady" by Duke Ellington.


However, the musical director of the film, Davie Raksin, wrote the melody that will forever be associated with the portrait - they go together, are meant for one another.


Later, Johnny Mercer wrote lyrics to go with it and it too became a classic.


. . . Laura is the face in the misty light,
footsteps that you hear down the hall;
The laugh that floats on a summer night
that you can never quite recall,
And you see Laura on the train
that is passing through.
Those eyes, how familiar they seem.
She gave her very first kiss to you.
That was Laura . . . but she's only a dream.

The Allure of Laura

What makes Laura so alluring? Why has it continued to capture audiences years later? We become just as fascinated with the portrait of Laura as the characters in the movies. Is it the beauty? The mystery? All of the elements of the film, its chemistry, its haunting title song, and its unique plot, all light the fire of our imaginiations and draw us into the plight of this girl who we have come to know through others memories of her. She becomes a memory for us also and we are just as surprised as McPherson when she suddenly walks in the room, alive and whole. We too think at first that we are seeing a ghost. 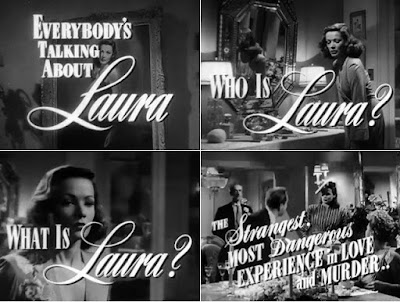 This post is part of the month-long 2015 TCM Summer Under the Stars Blogathon hosted by Journeys in Classic Film. Check out all of the other great posts throughout the month here! 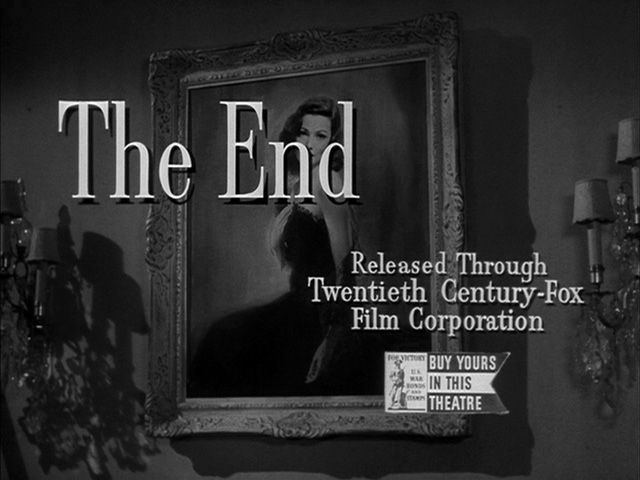 Also, several extremely interesting articles about the characters and deleted scenes. The different posts on Laura are listed on the right side. Here's another great post.
Posted by Phyl at 12:12 AM