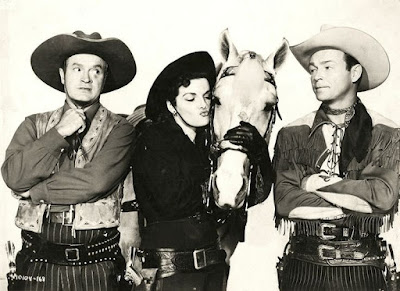 That's right. Apparently the original Trigger, the one who made his film debut as Maid Marion's horse in The Adventure's of Robin Hood (1938) before being adopted by Roy Rogers, had by the 1950s retired from films.

Little Trigger, a Morgan, was smaller than Trigger and a lighter honey color. He was exceptionally smart and learned cues for over 100 tricks. He was also a good dancer, as can be seen in the video at the top of the post. He was also housebroken, meaning he could accompany Roy Rogers on visits to children's hospitals. 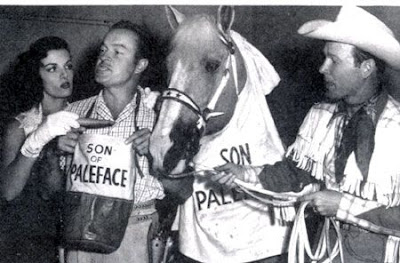 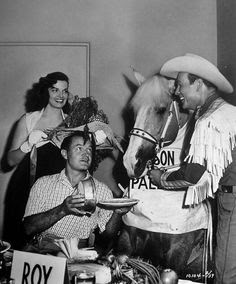 Little Trigger's performance in Son of Paleface is amazing to watch. He does all kinds of tricks - untying knots, running up stairs, and even is able to steal a scene from Bob Hope. In the scene, Bob and Trigger are sharing a bed. Trigger keeps stealing the covers from off of Bob. Unfortunately it's not of YouTube.

Trigger turns comedian and is by all odds the handsomest as well as the funniest performer in the film.

~ Film Critic Catherine Edwards
Trigger even won the Patsy Award (an award like an Oscar from the American Humane Association) for his role.
This post is part of The Animals in Film Blogathon hosted by In the Good Old Days of Classic Hollywood (and my upcoming co-host to the Olivia de Havilland Centenary Blogathon). Check out my other post on The Film Career of Skippy aka "Asta" and be sure to read all of the other posts about Hollywood's most talented four-legged friends! 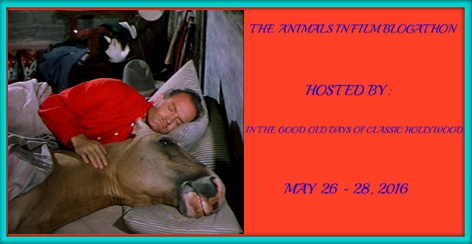