The Film Career of Skippy aka Asta 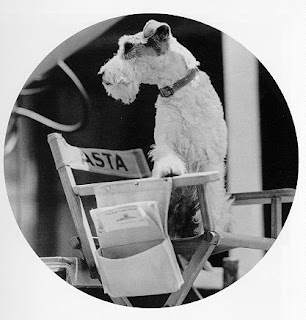 Skippy, a wire-haired terrier, was born in 1931/1932 and enjoyed an illustrious Hollywood career until his retirement in 1941. One of the smartest dogs in Hollywood, enjoying a salary of $125 a week compared to $3.50 a day of other canine actors, Skippy began training at 3 months old. Soon he was able to respond to both verbal and hand cues.
His first film launched him to stardom, almost equal to that of his co-stars who had been in pictures for many years. It was The Thin Man (1934) and Skippy played the world's bravest (ok, not really) detective's dog, Asta. He often follows Nick (William Powell) on his investigations, covers his face with his paw when Nick and Nora kiss, run off with valuable clues, and hide under the furniture when he is scared. He is also a family man (with a not so faithful "wife"). After the success of the film, everyone wanted a wire-haired terrier.

Skippy was then cast in small roles in four films in the year 1935 (The Big Broadcast of 1936, Lottery Lover, It's a Small World, and The Daring Young Man) and the following year reprised his role as Asta in After the Thin Man (1936).
Skippy's two other big roles included his role as Mr. Smith in The Awful Truth (1937) starring Cary Grant and Irene Dunne and as George in Bringing Up Baby (1938) starring Grant and Katharine Hepburn. 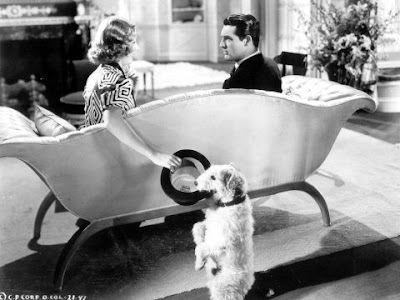 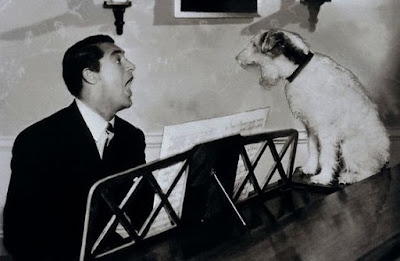 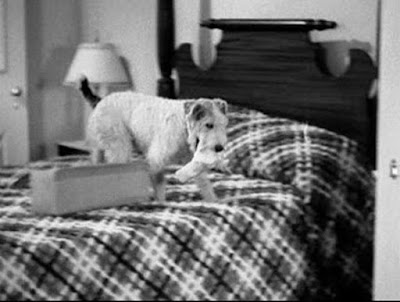 As George, running off with Grant's intercostal clavical.
An article about Skippy, titled "A Dog's Life in Hollywood," appeared in the August 1938 issue of The American Magazine:
Movie actresses stroke Skippy lovingly. They coo at him and murmur endearing terms in his ears. He takes it all in his stride, because, what with contracts, options, and exacting work before the movie cameras, he hasn't much time for the attentions of Hollywood's most beautiful stars. But if he's paid for it and given the proper cue he will snuggle in the arms of the loveliest of stars, gaze into her limpid eyes, and, if necessary—howl.

Skippy, a smart little wire-haired terrier, is one of the leading stars in pictures. He leads a glamorous life—a dog's life de luxe. He is rated as one of the smartest dogs in the world, and when contracts are signed for his appearance in a picture he gets $200 a week for putting his paw-print on the dotted line. His trainer gets a mere $60.

His owner is Mrs. Gale Henry East, once a prominent movie comedienne. ... "When Skippy has to drink water in a scene, the first time he does it he really drinks. If there are retakes and he's had all the water he can drink, he'll go through the scene just as enthusiastically as though his throat were parched, but he'll fake it. If you watch closely you'll see he's just going through the motions of lapping and isn't really picking up water at all. And, because he has a sense of humor, he loves it when you laugh and tell him you've caught him faking but that it's all right with you.

"Treat a dog kindly and he'll do anything in the world for you." 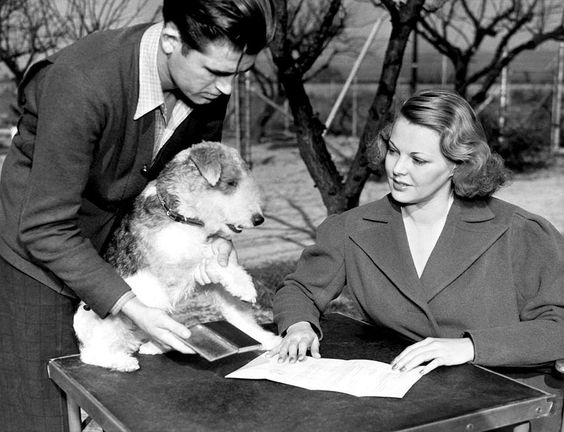 "Signing" his contract for Bringing Up Baby.
This post is part of The Animals in Film Blogathon hosted by In the Good Old Days of Classic Hollywood (and my upcoming co-host to the Olivia de Havilland Centenary Blogathon). Check out my other post on Trigger in Son of Paleface (1952) and be sure to read all of the other posts about Hollywood's most talented animals! 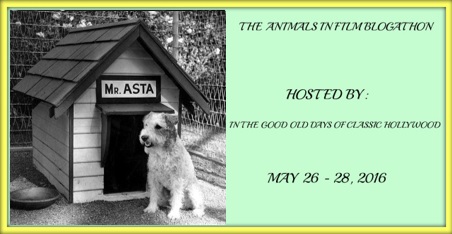