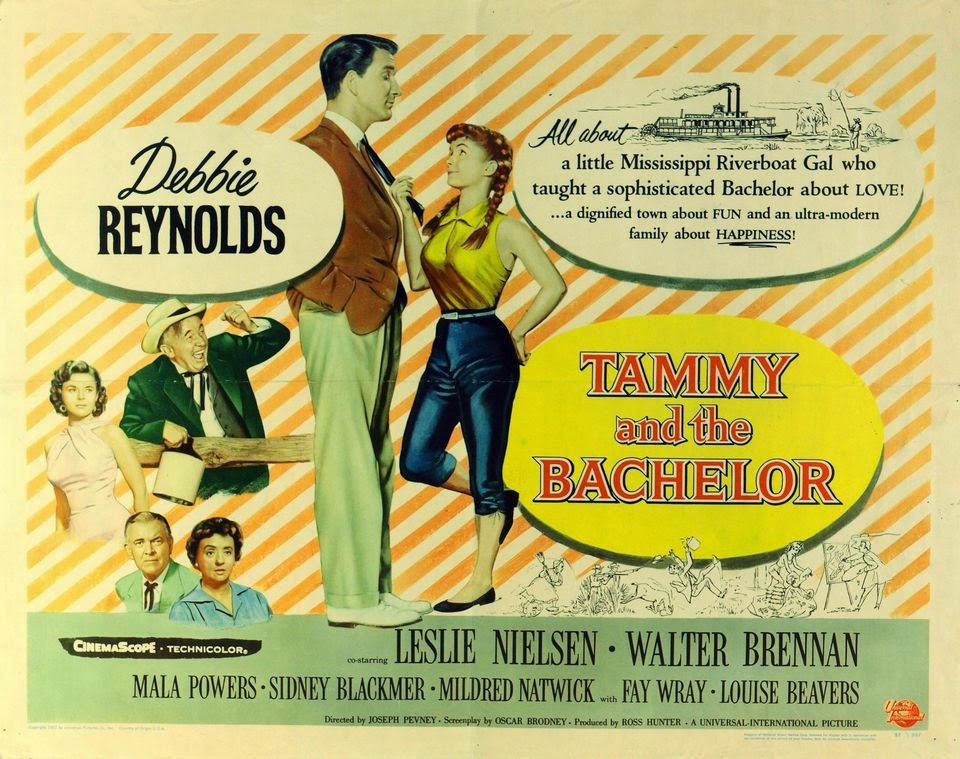 Trailer
Tammy and the Bachelor is a fun, happy movie about an innocent 17 year old Mississippi girl named Tammy (Debbie Reynolds, who was 25 at the time) who lives on a riverboat with her grandfather (Walter Brennan), a preacher/moonshiner. When a small plane crashes near their boat, Tammy and her grandfather go to see if there are any survivors. Enter the bachelor (Leslie Nielsen, 31). They find the pilot of the plane in the water and injured. They take him back to the boat and Tammy takes care of him until he is well again. His name is Pete, and he is a wealthy Southern gentleman. During his stay, Tammy falls in love with him. When he leaves, he invites Tammy to come see him at his family home, if she ever needs anything. 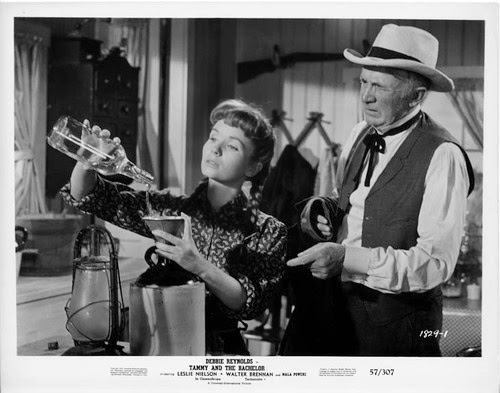 Not long afterwards, Tammy's grandfather is arrested for moonshining. He tells Tammy to go to Peter's house to stay, as she can't stay on the boat by herself. So Tammy, and her goat Nan, set off to town.
Tammy is exhausted by the time she reaches Peter's house. She looks through the window and sees several young people practicing a reel. She sits down on the porch to watch and falls asleep. She is eventually discovered and given a room in the house for the night.
The next morning, Tammy makes breakfast for the family and makes herself useful. Pete's mother, Mrs. Brent (Fay Wray) dislikes Tammy because she is backwards and unsophisticated, as well as always happy, something Mrs. Brent is not. Prof. Brent (Sidney Blackmer) and Pete's Aunt Renie (Mildred Natwick) however, love her innocent outlook on life. During her stay, Tammy also learns that Pete hopes to someday make the family plantation be self-sustaining as it was in the old days, rather than go into the advertising business like his family wants him to. She also finds out he has a fiancée. 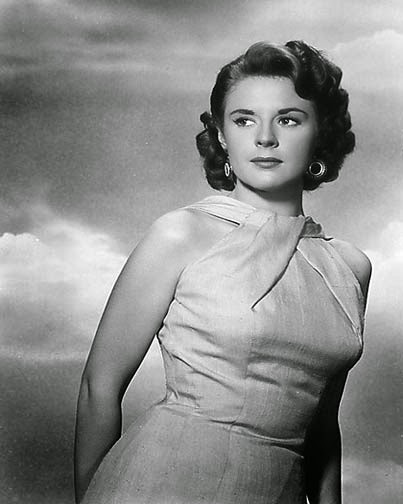 Mala Powers as Barbara
Every year the Brent's open their plantation, Brentwood Hall, to the public for a tour and party, as it is a historic site. Aunt Renie loans Tammy a costume so she can participate in the fun. Tammy ends up being the hit of evening, as she uses her backwoods charm.
That night, tragedy strikes. A huge storm ruins Pete's tomato plants that were his first step into restoring the plantation. Pete decides to give up his dream and go into advertising to please his parents.
The next morning, the family discovers that Tammy is missing. Pete realizes he loves her, breaks up with his fiancée, goes after Tammy, and everything ends happily. 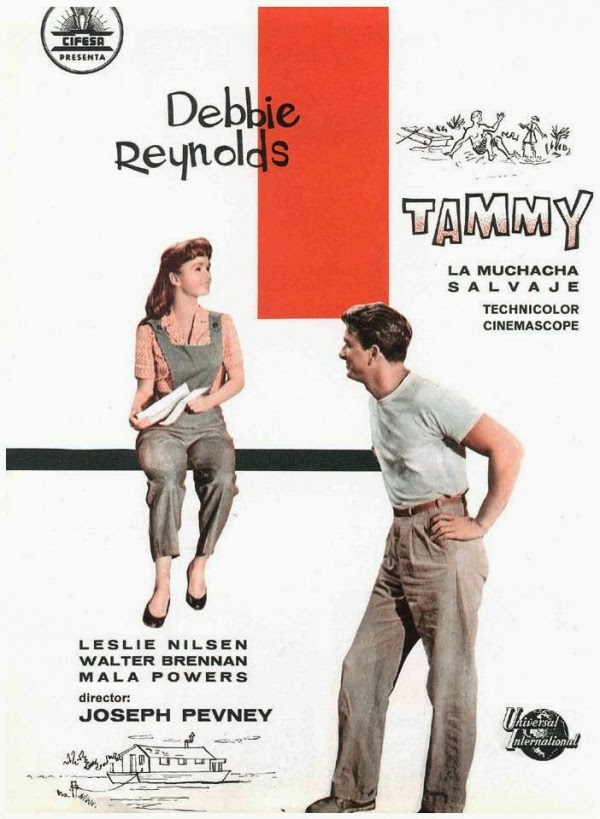 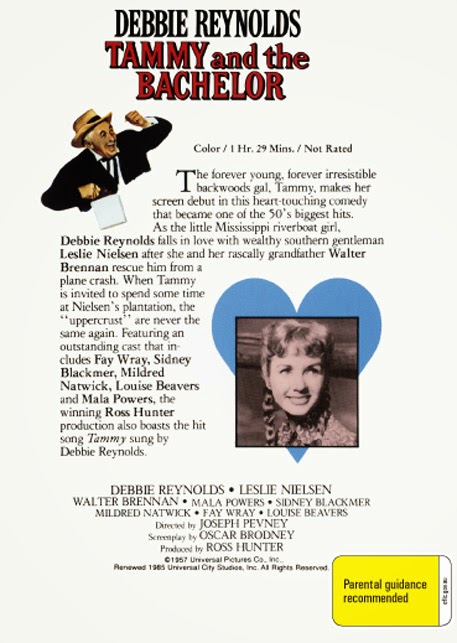 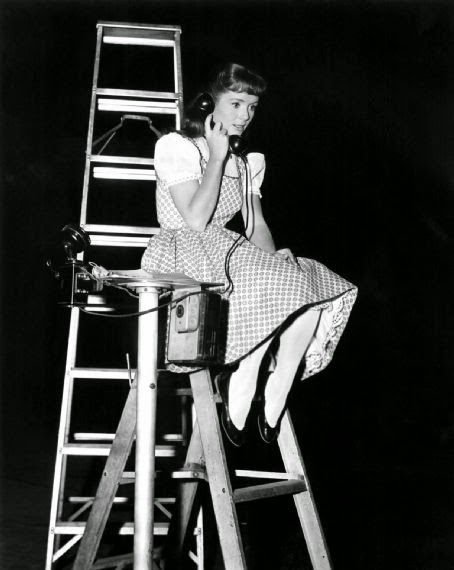 Debbie Reynolds on the set of Tammy and the Bachelor
I enjoyed this movie a lot. It is a feel-good movie. I liked the character of Aunt Renie. She is a painter and Tammy inspires her to leave Brentwood and go live in New Orleans and paint all the time like she has always wanted to. She is also a sort of mother-figure to Tammy during her stay there. This is also the first movie I really liked Debbie Reynolds in. She is believable as Tammy, as Sandra Dee in the two sequels is not. Although I enjoyed the sequels, Tammy Tell Me True (1961) and Tammy and the Doctor (1963), they just aren't quite as good as Reynolds. She IS Tammy. My brother, who is in his 20's, also enjoyed this movie, so it should not be dismissed as a "girl" movie.
Opening song - "Tammy" sung by the Ames Brothers

Tammy watched a riverboat go by.

Taking care of the injured pilot.

They go for a swim in matching bathing suits, stitched together by Tammy.

Pete: Aren't you going to walk with me to the edge of the swamp?
Tammy: Grandpa can show you the way. I don't want to scatter my good bye through the swamp, sorta... trailin' it out. I'd rather hold it together. 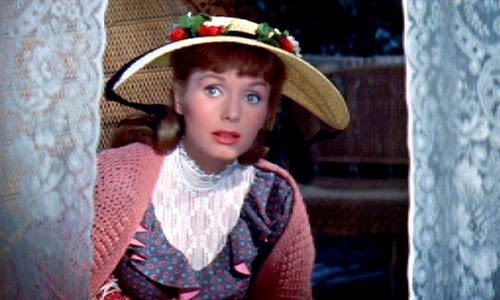 She peeks in the window. 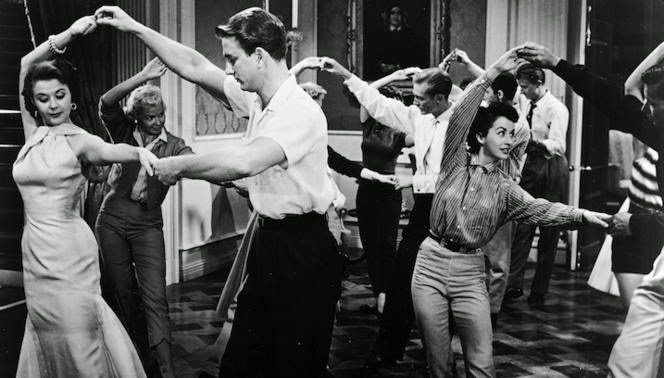 They find Tammy sleeping on the porch.

Pete talks about his dream of restoring the plantation to it's former glory.

Pete shows Tammy his tomato plants.
Folks used to leave a few things in the hands of the Lord, like the last day and the end of the world. Now they took it on themselves. That's how come everyone's so unsure! They don't trust each other or themselves like they used to trust the Lord!

Tammy's in love.
When the movie was first released, it did not do well at the box office. However, after the song "Tammy" was released as a single, it immediately went to the "Top 40" charts and remained there for 23 weeks, winning Reynolds a Gold Label. It was also nominated for Best Song at the Academy Awards that year. When the film was re-released it was a smash hit. If you feel like singing your own version of "Tammy," here is a nice karaoke. 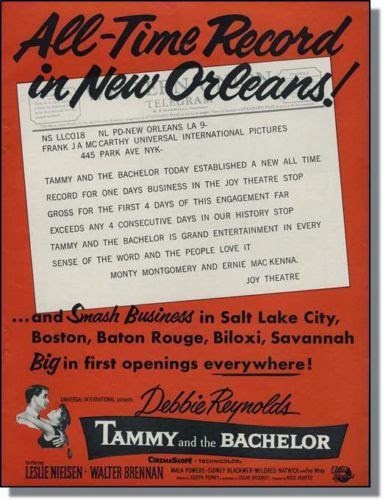 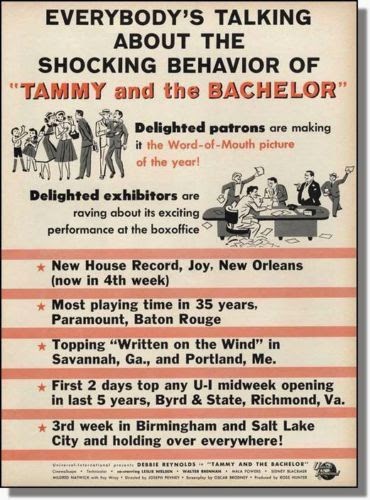 Pete's friend tries to take advantage of the innocent Tammy.

Working in the garden.

Meeting about an advertising job for Pete.

Pete assures Tammy he won't give up his dream.

You can read Tammy's recitation for the party here.

Trying to save Pete's tomato plants.

Tammy's gone and Pete must go after her...if he loves her.

He has some unfinished business, and a surprise. 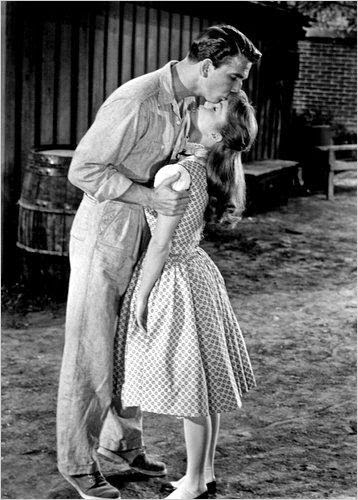 Nielson was 6'1½" to Reynolds 5'2"
At the time of this posting, you can watch the full movie on YouTube here (with Spanish subtitles).

This post is my entry to the Cinemascope blogathon at Classic Becky's Brain Food and Wide Screen World. 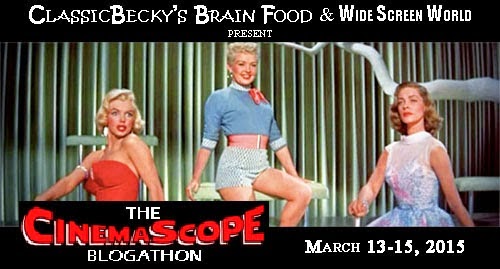 All images found via Pinterest, Google Images, and milliesmoviestowatch.
Posted by Phyl at 1:40 AM