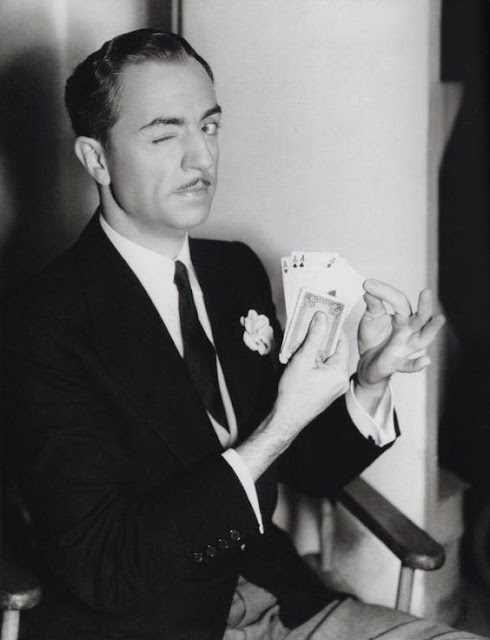 William Powell is one of my top three actors, along with John Wayne and Cary Grant. However, unlike the other two who I grew up watching, Powell came along later.

The first films I saw of his were on a dvd from the dollar store, a double feature: My Man Godfrey (my first introduction to Carole Lombard) and Life with Father. I found Godfrey to be a bit too crazy for my tastes at the time, but my entire family loved Powell's Oscar-nominated performance in Life with Father. A couple years after that I saw the first four Thin Man films and I know I enjoyed them but I didn't go crazy over them. Then, a couple of years ago, I rewatched the Thin Man films and realized just how brilliant Powell and Loy were as a comedy team. It didn't take me long to try to get my hands on all of the other films they made together, as well as watch as many of Powell's films that I could find (thanks TCM and YouTube!). Since then I have watched almost all of Powell's "talkies." I think I just have around a dozen films left. I just discovered a couple of them here and keep hoping TCM will air some of the others.

Narrowing down my favorite ten William Powell films is pretty much next to impossible. Just presume that all the rest are Honorable Mentions ;)

When did you discover William Powell? Have you seen all of his pairings with Loy? What's your favorite Powell film outside of the Thin Man series?