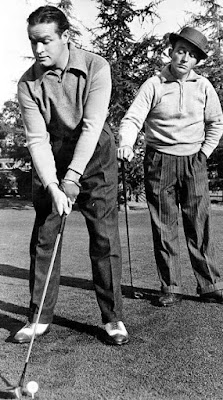 Bob Hope is everyone's favorite comedienne. Or at least, he's one of mine. I can't remember the first film I saw of his. It was either Son of Paleface (1952) or My Favorite Brunette/Road to Bali (double feature dvd from Dollar Tree). Whichever film it was, I found Bob to be hilarious and now own several of his movies. His bromance with Bing Crosby is one of the greatest ever captured on film (Bing has a cameo in virtually every Hope film. If not Bob makes a crack about him). I still have lots of his movies to see, but here are my favorites:

10. The Road to... Series with Bing Crosby and Dorothy Lamour (except Hong Kong) - ok, I'm cheating with this one but I don't remember which ones I like best)

What film was your introduction to Bob Hope? Which of his films is your favorite?
Posted by Phyl at 8:57 PM