Before you start reading, press play (Ugh. I had the wrong song). Also, know that I hummed
the music probably the entire time I was writing this post.

Rio Grande (1950), if I'm pressed to choose, is my favorite John Wayne film. And if you know me you know I LOVE John Wayne. Therefore, when I learned of The John Wayne Blogathon my friend Hamlette was hosting, I decided it was time I gave this beloved film a full post.

This film was included in my 5 Movies on an Island list. Here are the reasons I gave in that post:
So now that I have given you the reasons I love the film, I will tell you more about the film itself. 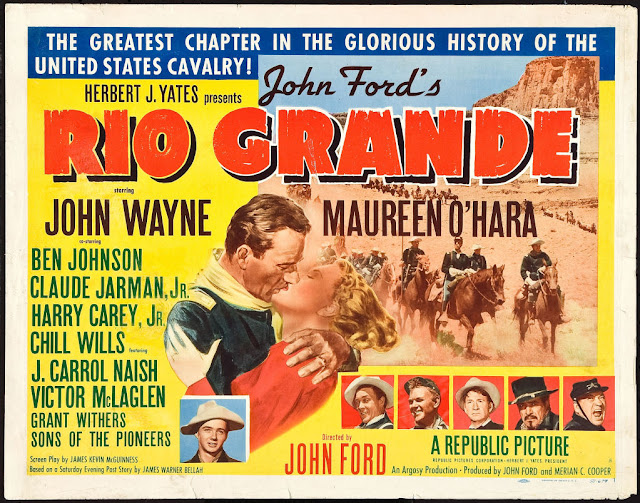 Rio Grande (1950) was made for one reason: so that John Ford could make The Quiet Man (1952). That's right, it was part of a deal - "you make this movie and we'll let you make that movie." And am I ever thankful that this deal was made!

For a long time, John Ford had wanted to make a movie in Ireland called The Quiet Man with John Wayne and Maureen O'Hara in the lead roles. Republic Pictures, who had promised Ford complete artistic freedom of any films he made under their banner, did not think the film would have enough box-office appeal (boy, were they ever wrong!) and told Ford that he could make the film only if he made an inexpensive Western first, using the same stars to be used in The Quiet Man. The story chosen was James Warner Bellah's "Mission with No Record." It was to be a conclusion of the Cavalry Trilogy (Fort Apache, She Wore a Yellow Ribbon - both based on stories by Bellah). Filming began on June 15, 1950 on location in Moab, Utah. 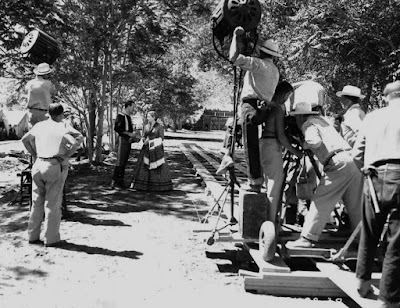 The film tells the story of Lt. Col. Kirby Yorke (Wayne) who is stationed on the Rio Grande to keep the Apaches. His son Jeff (Claude Jarman Jr.), whom he hasn't seen for fifteen years, shows up one day as a new recruit, who failed at West Point. He is followed soon by his mother, Yorke's estranged wife Kathleen (O'Hara) - Yorke burned down her family's ancestral home under orders when their son was only a baby, cementing the growing rift between them. Rounding out the cast is John Ford's stock company: Victor MacLaglen as Quincannon (a name used in other Ford films), Chill Wills as Dr. Wilkins, Ben Johnson as Trooper Tyree, Harry Carey Jr. as Trooper Daniel "Sandy" Boone (that name sounds kind of familiar!), and the Sons of the Pioneers as the Regimental Singers. Wayne's son Patrick also has a very small part in the picture, as he and Wayne's other children often did. 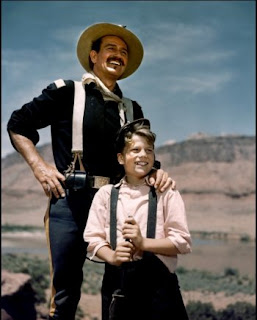 This film is different from the two previous cavalry pictures as instead of negotiating with the Indians and arguing with those above him, Yorke is simply trying to keep the peace. However, in classic John Ford style, there is a rousing fight between the soldiers and the Apaches after the Apaches attack the wagon train bringing the women and children to Fort Bliss and making off with the children, keeping them in an old church. 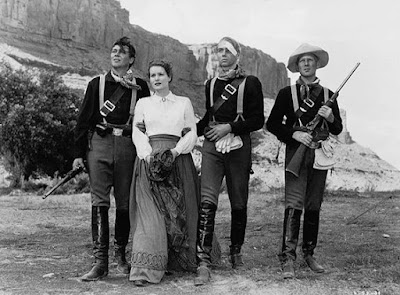 This was the first film that put Wayne and O'Hara together and the screen crackles with chemistry. You really do believe that they are an estranged couple who haven't seen one another for fifteen years but who still love each other deeply. They were an ideal match, both strong and independent yet complementing each other perfectly, O'Hara with her feistiness and Wayne with his quiet, commanding presence. They were believable because they respected one another and treated each other as equals. It was to be a trademark in all of their films together, cementing them as one of the greatest on-screen couples in the history of film.

Just watch the contemplative expressions of Wayne and O'Hara as they listen to "I'll Take You Home Again, Kathleen." You can instantly see that the song is significant to both of them, especially in the way Kathleen leans towards her husband and then moves away when he notices and in the way Kirby gazes at his wife at the end of the song. 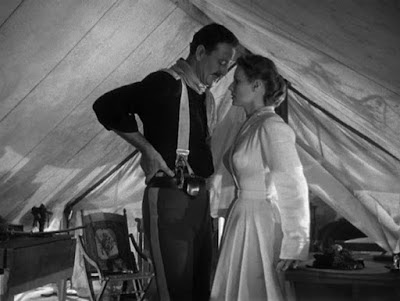 You can sense the sexual tension even in this still image.

She was his (Ford's) idea of a beautiful Irish woman with spirit. Maureen was the sort of woman he would have invented. 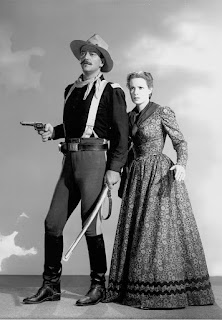 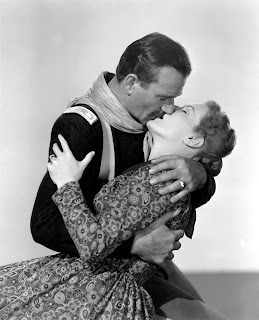 The other relationship in the film is between father and son. Jeff wants the father he never knew to be proud of him and Yorke, who is already proud of him, wants to make sure that he doesn't get hurt. And even though Jarman doesn't look at all like he could be the son of Wayne and O'Hara, both he and Wayne give touching performances, culminating in Yorke telling Kathleen, "Our boy did well" as he lies on a stretcher after having been shot with an Apache arrow. 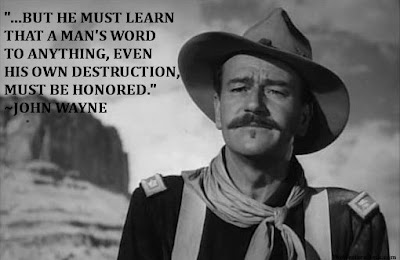 The film ends with the rousing song Dixie, with Wayne smiling and O'Hara twirling her parasol, showing that all is forgiven and there are happier times ahead.

This film is a like a love letter. It is tender, poignant, stirring, and full of passion. And even though it was only made as part of a deal, it was still crafted with love and care. I could have written on and on about this film: interesting facts about the making of it and the experiences of the other actors, but love is the essence of the film, and that is the feeling I wanted to leave you with. 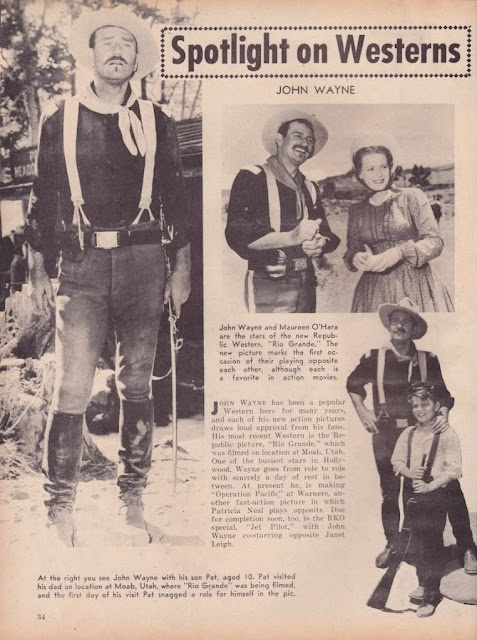 Saw Rio Grande. It's great. After seeing the tripe that is turned out today, it's a delightful pleasure to see a show made by the Old Master himself.

This post is part of The John Wayne Blogathon hosted by Hamlette's Soliloquy and The Midnite Drive-In. Be sure to read all of the other posts and enter the giveaway! 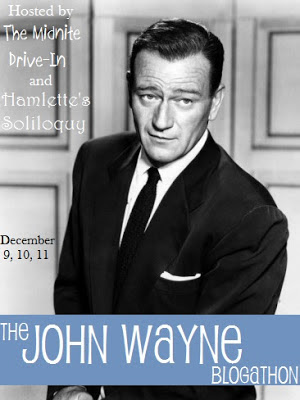