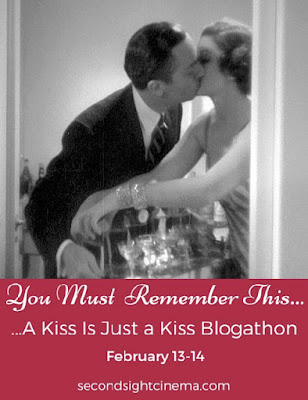 Nick and Nora - everyone's favorite married couple. When I learned about the You Must Remember This... A Kiss is Just a Kiss Blogathon, I knew I wanted to share the kisses from my favorite film series, The Thin Man starring William Powell and Myrna Loy.

1934-1946, the years that the series spanned, was the time of the 3-second kiss rule - it's kind of like the 5-second rule but applied to kisses. Some directors got around this rule with a little creativity (I'm sure someone is doing Notorious for this blogathon). Nick and Nora followed the rules but still looked like they were enjoying themselves - and you know those kisses would have been longer in "Nick & Nora" land.

And so, fix yourself a dry martini, sit back, and enjoy the exquisite chemistry these two stars shared.


The Thin Man (1934)
Anyone who's a fan of the Thin Man films has come across the image pictured above before.
And if it's been a while since you've seen the film, you may have forgotten how quick this moment actually is.

But here's what makes this kiss special. It's not the obligatory "Goodbye dear, I'm off to work" kiss or the "Honey, I'm home" kiss. It's a "just because" kiss, an "I can't pass you and NOT kiss you" kiss. It's the kiss of a man and woman who are completely in love with one another and who like to remind each other of it often. (Love her little smile at the end.)
Then there's this kiss during their Christmas Eve party (all of the tipsy guests are singing O Christmas Tree).

Oh, Nicky. I love you, because you know such lovely people. 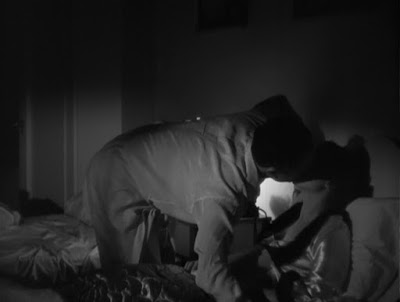 A kiss before bed.
Their sleep is interrupted by a gunman. Nicky has to sock Nora to get her out of the line of fire and accidently knocks her out. He gives her a kiss to make her feel better.

Then there's the "upset with your hubby because he's about to do something dangerous and isn't taking it seriously so he has to kiss you on the cheek" kiss.

And then running after him to kiss him because you love him so much.

Then there's a little kiss before the "reveal" dinner, where Nicky hopes the murderer will give him or herself away.

A screenshot so you can see it better: 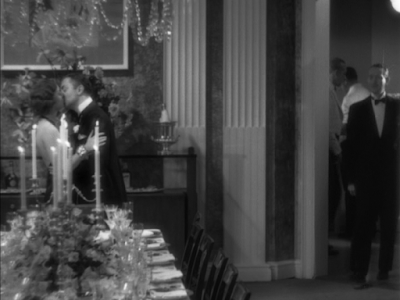 The final kiss is on the train back home. Asta gets thrown on the top bunk (and covers his eyes with his paws). 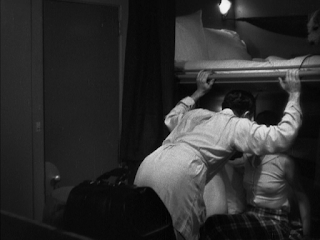 We all know what's about to happen ;)
If you would like to read more about the first four Thin Man Films, check out my recent post on the relationship between the director Woody Van Dyke and the Powell/Loy team.
After the Thin Man (1936)

The second Thin Man film picks up where the first one left off. One way to allude to a longer kiss is to show someone watching them kiss. "We're married," Nora assures the man who sees them.

Nora, you're my favorite woman. I'm going to be in bed at midnight so, Happy New Year [kiss].
Happy New Year.
Things don't go as planned however, and they end up at a nightclub at midnight. Unfortunately, in the confusion and darkness, Nicky kisses a stranger at midnight.

Which he remedies when he finds Nora.

Happy New Year, baby.
After a very long night that involves some shootings, Nora being put in jail, and police questioning, the Charles' finally get to bed. 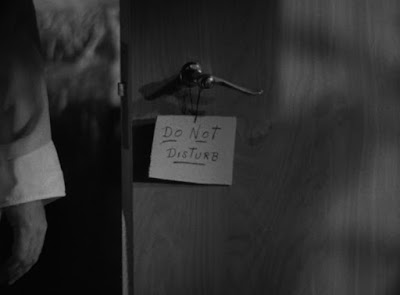 Analyzing a letter the next evening to see if it's a forgery.
The final shot of the film is this kiss, on the train again. Nicky has just discovered that Nora is expecting (she is knitting a baby booty). These kind of scenes are some of my favorite in movies (It's a Wonderful Life comes to mind). You can see a little more of the scene in this video (at the 1 min. mark and at the very end).


The third installment finds Nick and Nora at the home of one of Nora's father's associates, Colonel MacFay. The first kiss comes in appreciation for sneaking the keys to the liquor cabinet out of the Colonel's pocket.

Then, after a couple murders, there is an "almost" kiss.


Then we have William Powell kissing a baby - just because :)

Nora tries to do some sleuthing on her own, which means pretending she is single and looking for a room to rent. Nicky pretends to be looking for a room too and when the landlady introduces them, they continue to pretend they don't know one another. Then Nicky does this:

Well that's the fastest piece of work I ever saw in my life!
And when their quiet weekend is over...


The only kiss in the fourth Thin Man film was at the very end. I just skipped through the movie however, so I may have missed any other kisses. I don't think so though.

In the fifth Thin Man film, there are still plenty of kisses and cute moments. There's a moment when William Powell falls out of his hammock and there is an "almost" kiss - his mother comes out of the house at that moment (you can see it is the video below). 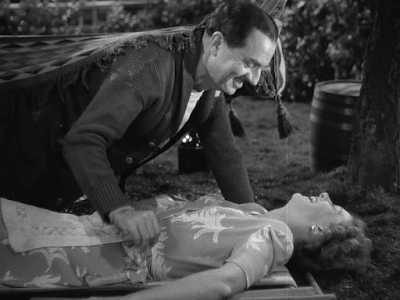 The first kiss is when Nicky comes in and Nora greets him with a quick kiss and a foot-pop, only to be spanked a moment later (playfully of course). 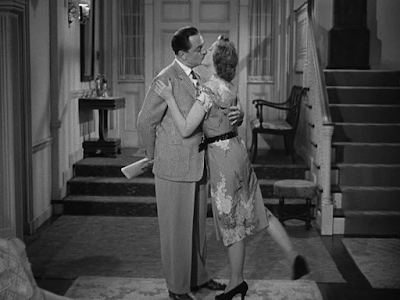 Next comes, in the words of Nora, an "epidemic of kisses." As Nicky is getting ready to go out, he is singing, with his own lyrics, "Deep in the Heart of Texas," replacing the clapping with kisses.

It's an adorable scene. I love this screenshot: 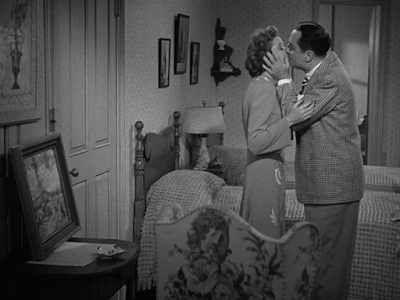 The last kiss in the film is drawn out during a conversation that Nicky is not taking seriously.

Song of the Thin Man (1947)
There weren't any kisses in the last Thin Man film. Both Powell and Loy looked a little tired of playing the same role, though Powell tried a little harder. The only part of the film with a hint of romance and witty banter was this little scene (sorry they isn't a video clip):

I've got a great idea.
What is it?
Let's go home.
What's at home?
You. My pipe. My slippers.
Nicky, I think you're slipping.
Darling, give me my pipe, my slippers and a beautiful woman...
and you can have my pipe and slippers.

So, who else wishes they were married to Nick or Nora?

To view more kisses, check out the rest of the entries for the blogathon here. Also, on the AMC site there is a page of Best Film Kisses. And here's my other entry - the final kiss in Small Town Girl (1936) aka the cutest film kiss ever.
Posted by Phyl at 8:01 PM