Following the popular pattern of The Bells of St. Mary's and Going My Way, which found much charm and amusement in the lives of nuns and priests, this fable, originally written for the screen by Clare Boothe Luce, finds further romantic enchantment in the work and devotion of nuns.
~ NY Times Review, Bosley Crowther, 7-28-49
﻿ 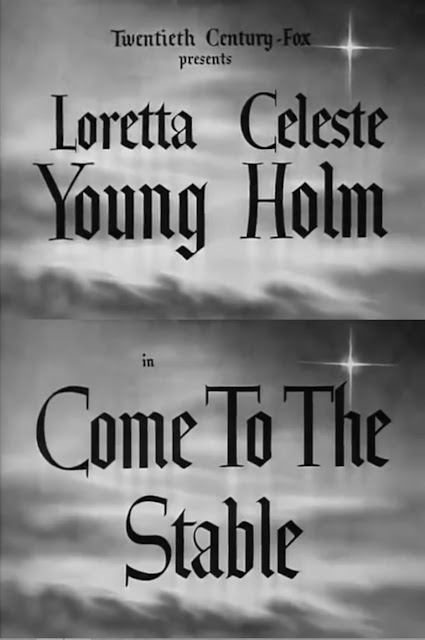 Come to the Stable (1949) is about two nuns from France who have come to Bethlehem (Connecticut, not the one in the Holy Land) to keep a promise and build a children's hospital. 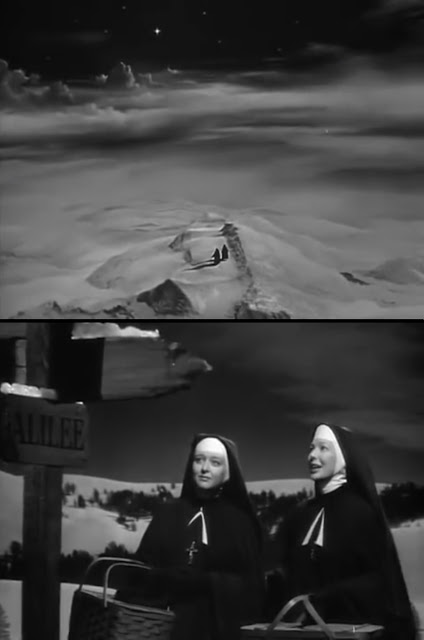 Celeste Holm as Sister Scholastica and Loretta Young as Sister Margaret
The film opens with this very surreal scene, of two nuns walking across a wide snowy expanse, appearing to be far from any civilization. They come upon a road sign that lists the names of all the places mentioned in the New Testament of the Bible: Bethlehem, Jerusalem, Galilee, etc. This mistakenly led me to believe the film was set in the Holy Land, which confused me until I realized they were in New England. Though they never specify Connecticut as the state, as there are several Bethlehem's in the area, it is believed that that is where the film is set. 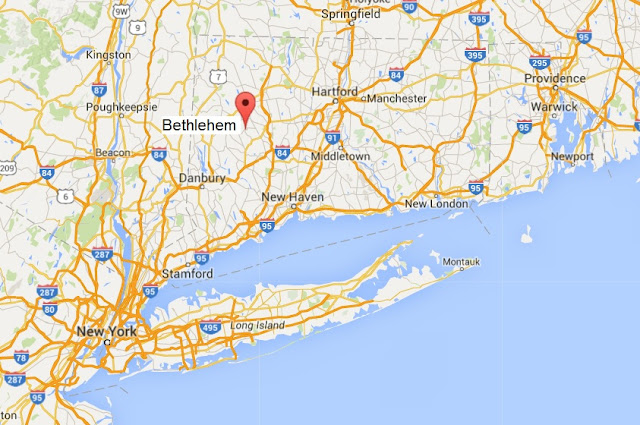 The nun's see a barn and go up to it. They peer in the doors and see the following scene. 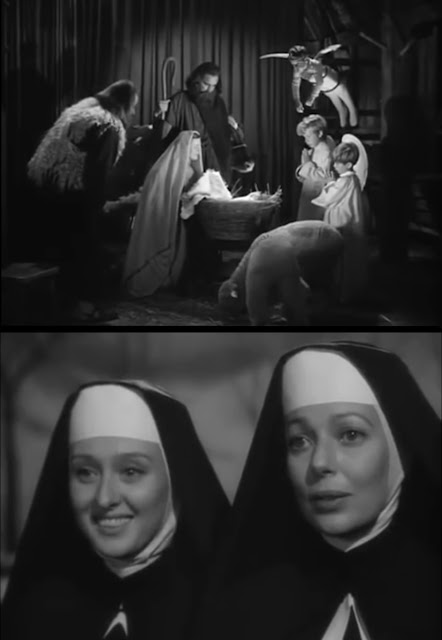 This (again) surreal scene is broken when one of the little boys suddenly kicks the other. It is then that you realize this is a family posing for a painting (who else thinks it's dangerous the way the toddler is suspended from the ceiling?). The painter is Miss Amelia Potts, played by Elsa Lancaster. 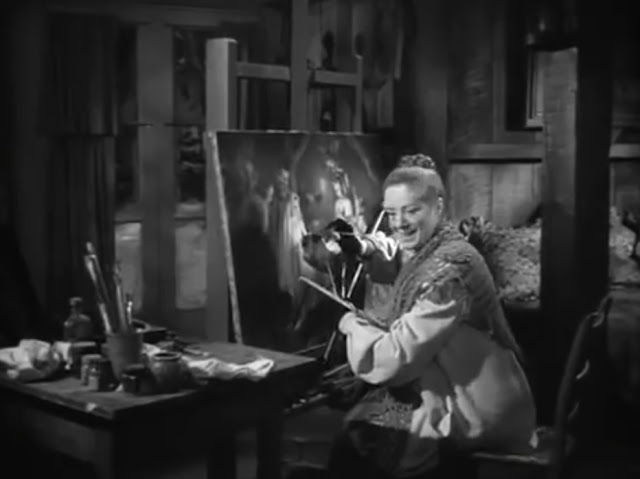 Miss Potts invites the nuns in (she can't leave them in the snow!) and asks them to stay for tea. The nuns inform her that they came especially to see her. They refer to a postcard featuring one of her paintings, "Come to the Stable." The reason for their visit they explain is that during WWII they were in charge of a children's hospital in France that was in the line of a German advance. As they couldn't move the children, Sister Margaret (Young) prayed that they would be spared. After the battle, the only building left standing was the hospital. Sister Margaret than promises to build a hospital dedicated to St. Jude (impossible cases) in New England. After seeing one of Miss Potts paintings, they decide that Bethlehem is to be the location. They end up (basically) inviting themselves to stay with Miss Potts until they talk to the bishop the following day and receive permission to go ahead with the hospital. 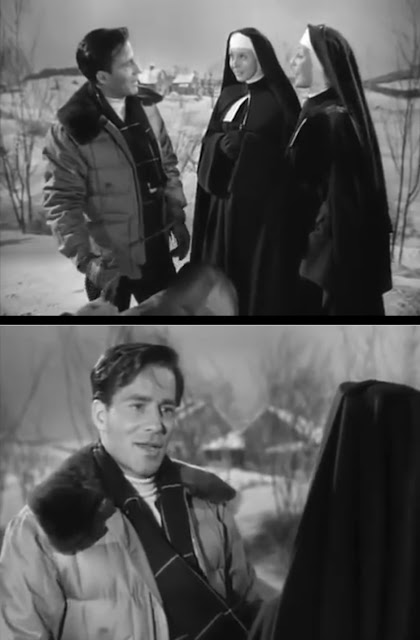 The next morning, while burying a statue of St. Jude on top of a hill that they want to build the hospital on, they meet another neighbor, Bob Mason (Hugh Marlowe). He is a songwriter who moved to the country where he could write his pop tunes in peace and quiet (of course they are nothing like what would be considered a pop song to us). The sisters ask Mason if he knows who owns the hill. He tells them a Mr. Luigi Rossi who resides in New York.
The sisters then set off to see the bishop, who gives them a little money. The next day they borrow Mr. Mason's jeep (he's leaving for Hollywood to work on a movie score for a few months) and head to New York to find Mr. Rossi (Thomas Gomez). He is a bookie, and they have trouble getting to his office. They finally do get to see him and ask him if he would be willing to donate the hill. Rossi says no, but gives them some money towards their cause. As the sisters are leaving, they discover that Rossi had a son who died in France near their hospital during the war. Rossi suddenly has a change of heart and gives the land but on one condition: they include a stained-glass window in memory of his son. Luigi Rossi
Now that the sisters have their land, they need money to begin building. While driving past the hill, the jeep gets a flat. Because of this they notice a For Sale sign on an old warehouse across the street, which they purchase for $25,000 with a three month option of $5000 to act as a temporary shelter until the hospital is completed. They immediately call the bishop to tell them their good news. He, however, is worried about the price of the building and goes out to investigate. While he is there, eleven more nuns show up. 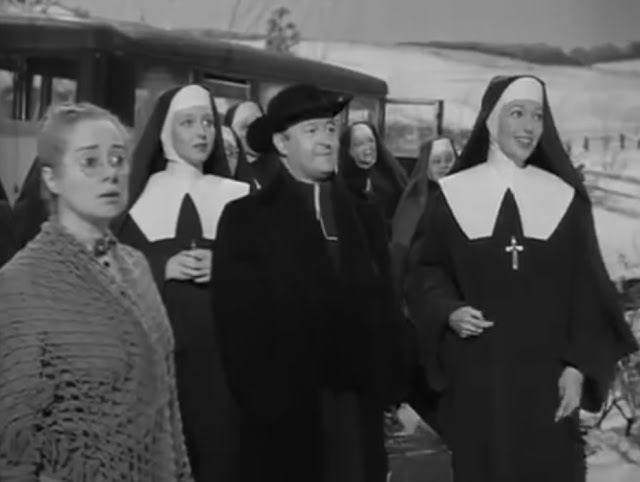 When Bob Mason gets back from Hollywood, he is surprised and curious at the sudden increase in nuns. He goes over to the stable to investigate and find that it has been converted into a chapel. The nuns are also selling produce and arts, ringing a bell to signal when they are open. Bob realizes that all of the extra noise is going to distract him from his work and so he sets out to try to get rid of them. He doesn't want to be mean but the whole reason he moved to this area in the first place was for the quiet and that is now gone. 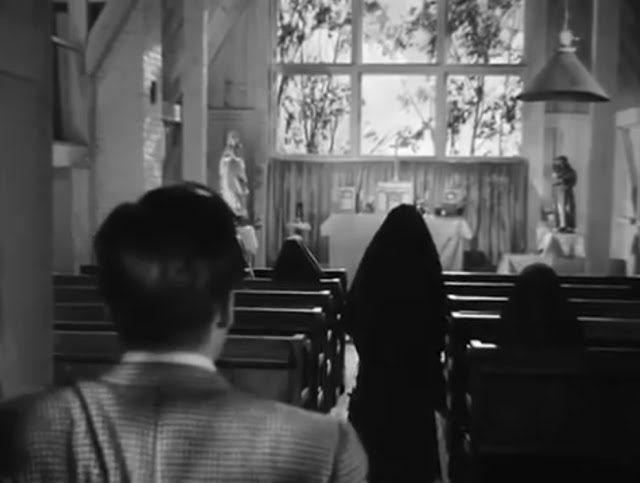 The three-month option is almost up and the nuns are $500 short. Maybe Mr. Mason will make up the difference? You'll have to watch the film to see what Mason's decision is and what makes him change his mind.

Directed by Henry Koster, who also directed The Bishop's Wife (1947), The Inspector General (1949) and Harvey (1950), the film opened July 27, 1949 and was nominated for a slew of awards, including Best Actress for Young, Best Supporting Actress for Holm and Lancaster, Best Song, Music, and Story.

A sequel titled A Spark in the Night was announced the following year that would show Young and Holm in Hiroshima after it was bombed at the end of WWII. It was never filmed.

This post is part of the Loretta Young Birthday Blogathon hosted by Cinema Dilettante, Now Voyaging, and the Young Sisters Appreciation FB Group. Be sure to read all of the other posts about this very fashionable star! 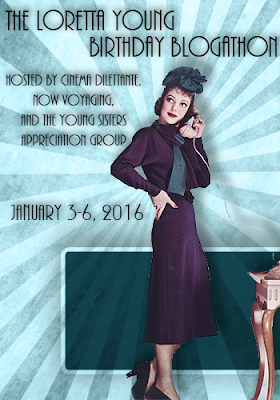