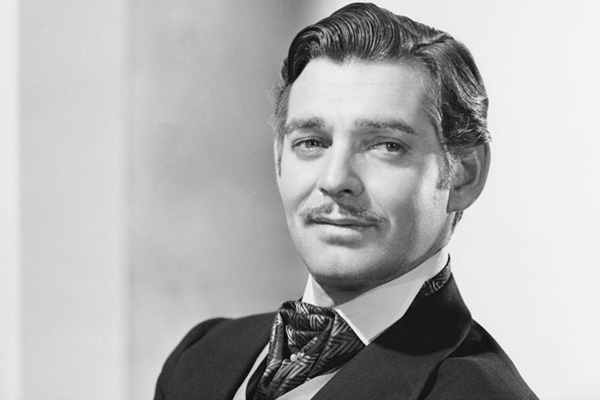 Clark Gable was known for his macho image in the movies, an image he carefully cultivated and protected. In much the same way how John Wayne always plays John Wayne in his films, so Clark Gable is always Clark Gable. That devil-may-care smile, those mirthful eyes, a man who takes on life as it comes and enjoys every minute of it, all trademarks of the "King."

But the King of Hollywood had another side to him. And it was this side of himself that he was terrified to show. Behind the scenes and away from the prying eyes of the camera, he was a voracious reader and a lover of poetry. Whenever he was called upon to touch on this other side of himself, to show emotion, he worried that he would be laughed at or seen as unmanly. Yet it is these precise scenes which allow Gable's true talent as an actor to shine through. In these moments he's no longer Clark Gable but really becomes his character. Below are three scenes from the films Gone With the Wind (1939), Adventure (1945), and San Francisco (1936) in which Gable proved he could act:

The most famous example of this comes from the most famous movie in all of film history: Gone With the Wind. It's not a scene that's widely quoted, but it is one of the most, if not the THE most, emotional scenes in the film. Bonnie Blue Butler, the daughter of Rhett Butler and Scarlett O'Hara, has just been killed in a horse riding accident. Bonnie was the joy of Rhett's life. He spoiled her, comforted her when she was scared, and loved her more than anyone else in the world. Her death leaves him inconsolable. Melanie, played by Olivia de Havilland, goes into the room where is sitting alone, drinking, and tries to comfort him. In the scene, director Victor Fleming wanted Gable to cry, which Gable refused to do. He wanted to stand with his back turned to the camera in heavy sorrow. De Havilland talked him into at least trying the scene the way Fleming wanted it, and Fleming promised that if Gable didn't like it they would do it his way. 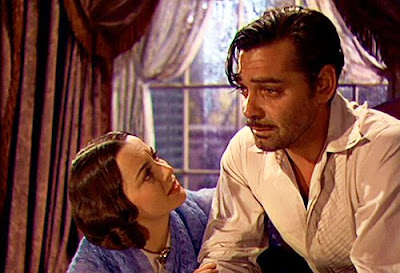 I remember talking to Clark about the scene when he is supposed to cry, after the death of his daughter. He was worried: you see, he had never cried on the screen before. He thought it was not masculine to cry.  He was so worried about it. ‘I’m just going to have to quit,’ he told me. I remember I said, ‘Tears denote strength of character, not weakness. Crying makes you intensely human.’ He agreed, rehearsed it, and it turned out to be one of the most memorable scenes in the movie (source).

After viewing the two different versions, Gable agreed that Fleming's way was more effective and one of the most heartbreaking and poignant scenes in cinema was born. 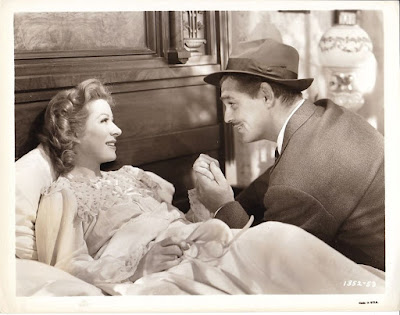 The ending scene of Adventure (1945) starring Gable and Greer Garson, contains another powerful scene in which their newly born child nearly dies. Gable, a sea captain who married Garson and then went back out to sea, comes home and learns that his wife is about to have a baby. When he arrives at the house the situation is grave. Garson is very weak and the baby is struggling to live. Gable goes into the room where the doctors are working on the baby. As he watches, they give up. The baby has stopped breathing. Gable goes over the table and looks down on this tiny baby and begins yelling at it, telling it to live so he can give him back to his mother. And at the last moment, the baby begins to breathe. It's a dramatic and emotional scene, heightened for me by the fact that Gable died before the birth of his son in real life, and only met his daughter with Loretta Young once. 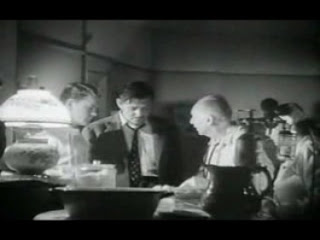 The only picture of the scene I could find.
If it comes on TCM again I will record it and post it here.

In another ending scene, this time after the Academy Award winning earthquake scene in San Francisco (1936), Gable is walking through the streets, frantically searching for Jeannette MacDonald and horrified by all the death and destruction going on around him. This was the only scene I was able to find on YouTube (in three parts below).


Look at the expressions on his face in this scene, as he searches for the woman he realizes he can't live without. Gable masterfully conveys what his character is going through without speaking and the audience fears the worst with him. And when he finds her, the audience feels the overwhelming rush of relief and thanksgiving that Gable feels. 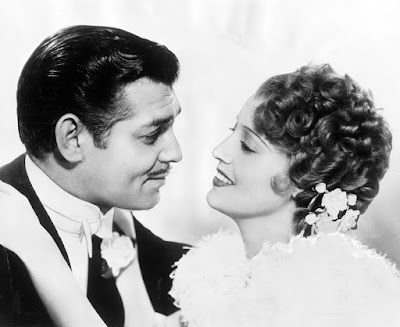 I hope you enjoyed this look at the Three Times Gable Proved He Could Act. If you've seen these films do you agree with me? Are there any other scenes you would have included? I watched Parnell (1936) last week and it too had a powerful closing scene and an overall restrained performance from Gable that, at the time of it's release, hurt the picture but now serves to show that "The King" was capable of so much more than the studio system, and himself, was willing to let him be.

This post is for the Dear Mr. Gable: A Celebration of the King of Hollywood Blogathon hosted by Love Letters to Old Hollywood in honor of Clark Gable's birthday. Be sure to check out the other great posts on this legendary actor! 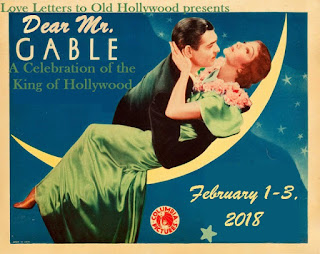