Today is Greer Garson day on TCM's Summer Under the Stars. Garson is one of the actresses I've been wanting to get to know better for some time so I was excited to see that she was getting a whole day of films this month. I watched two of them this morning (and am recording another three). One of the films I watched this morning was Her Twelve Men (1954) co-starring Robert Ryan of Film Noir fame. One of the reasons I wanted to watch it is because in it Garson plays a teacher. As someone with a degree in Educational Studies who has been doing part-time teaching for three years it sounded like something I would enjoy, and I did! 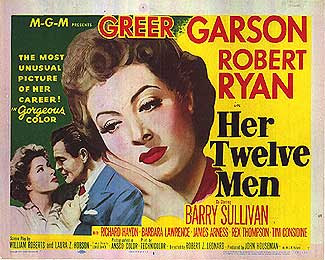 The film begins with Miss Stewart (Garson) on a plane to the prestigious all boys boarding school The Oaks, where she will be the first female teacher. A recent widow, she has to find something to do with her life and having previously enjoyed teaching for a short time after college is returning to that field. Upon arrival she is met with disapproval by fellow teacher Joe Hargrave (Robert Ryan), who thinks a woman teacher has no place there. Miss Stewart, or as the boys refer to her "Sir," goes through the usual boyish pranks (frog in the bed, etc.) but learns quickly from these experiences how to handle the boys in a way they will grow to respect her and, over the course of the school year, proves Hargrave wrong  and wins the hearts of her lonely boys she is put in charge of. 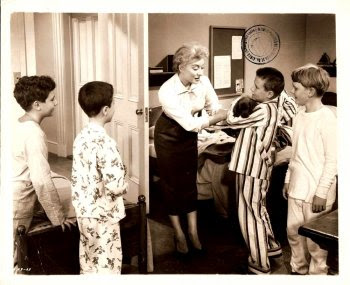 There were many touching scenes in the film as Garson handles homesickness and heartache, making "Her Twelve Men" feel loved and special when they don't receive the attention they need from their parents. One boy's parents are too busy running around Europe to write their son so she writes him letters pretending they are from his parents. It definitely tugs at the heart strings. 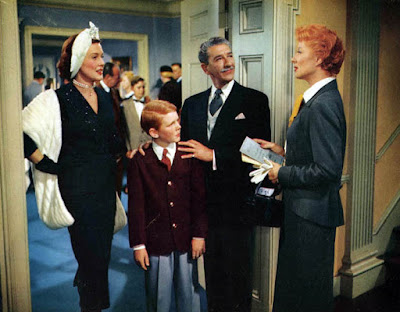 Partway during the semester a new boy is dropped off at the school (Tim Considine). Richard Jr. is the son of a busy oil man whose wife died shortly after his birth. Richard has a chip on his shoulder, scoffing at everything in the school and getting all the boys in his class in trouble when he sets off the sprinklers in the dorm. The rest of the boys freeze him out and Richard falls out of the bedroom window and fractures his leg as a result. Garson accompanies him back to his house while his leg heals. Richard gets to know his father better as a result and Garson gets a hint of a marriage proposal (prompting a rather funny conversation where the headmaster, played by Richard Haydn, suggests that Garson might soon be sending her sons to the school, even though Garson was nearly 50 at the time of filming). 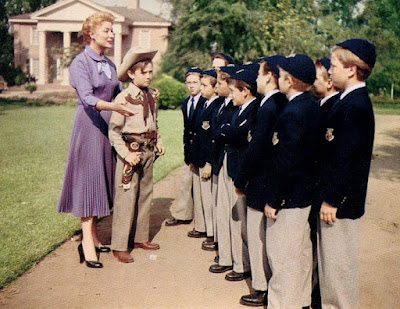 Considine being introduced to the other boys (he's from Texas).

Tim Considine is best known for being one of the original Mouseketeers with Annette Funicello, starring in Disney's Spin and Marty series (with David Stollery who plays Jeff in Her Twelve Men) and the Hardy Boys serials with Tommy Kirk as well as other Disney films. But he is probably best known as the oldest son in the popular and long running My Three Sons starring Fred MacMurray and William Frawley. Considine also appeared in another film with Garson, Sunrise at Campobello (1960). In it Garson plays Eleanor Roosevelt and Considine her son. The film chronicles FDR's life from when he contracts polio up to his running for President of the United States. 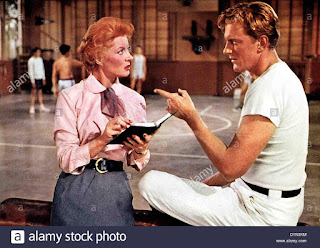 Another familiar television face is a young James Arness as the gym teacher. His part is rather small, simply as another love interest to show Garson's effect on the staff. 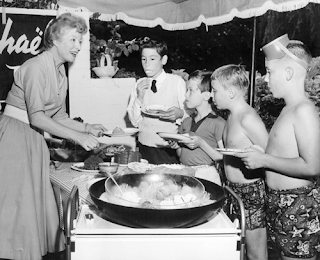 Greer Garson played hostess at her lovely Bel Air home to the twelve youngsters who played with her the  film “Her Twelve Men.” From left to right are George Folsey, Peter Votiren, Dale Hartleben and Tim Marxer. 2/5/1954

This was Garson's final film for MGM. She did a few more movies, including one for Disney, as well as several television appearances as a guest star or made-for-tv movies. Robert Ryan was only a third of the way through his career. The film was not well received by critics or its audience but I enjoyed it. If you missed Her Twelve Men (1954) this morning or don't have access to TCM, you can watch the entire film (in two parts) here. 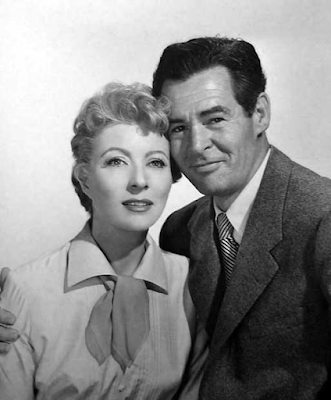 This post is part of the annual month-long 2017 TCM Summer Under the Stars Blogathon hosted by Journeys in Classic Films.
Posted by Phyl at 6:47 PM