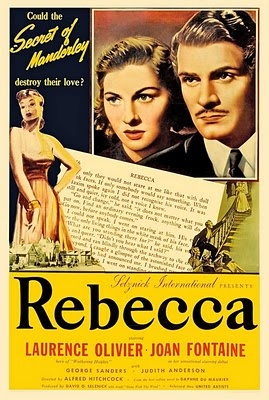 Rebecca (1940) was Alfred Hitchcock's first film made in America, after he and his family migrated from England at the start of WWII. While many claim his films from the 1960s are unsurpassed, it is his films from the 40s and early 50s that are my personal favorites.

Rebecca gripped me from the opening shot to the very end. The story famously begins with the voice of Joan Fontaine (who is only known as the second Mrs. de Winter throughout the film) telling the story of Rebecca. It begins with the now well known line "I dreamed I went to Manderley again," and the equally well known shot going through the overgrown gate and up the path with the camera's gaze finally resting on the shadowy, burnt structure of what was once the imposing MANDERLEY. Manderley is the ancestral home of Maxim de Winter (Laurence Olivier). Rebecca, who gives her name as the title of the film and is an unseen force throughout, was his first wife and Manderley had been their home. Rebecca however, drowned one day during a storm. Everyone says that Mr. de Winter was inconsolable, as they had been a model couple, envied by all. Therefore, when he falls in love with the naïve, shy, and awkward girl companion of American tourist Mrs. Van Hopper (Florence Bates), those who know him have great difficulty in accepting her, as Rebecca is irreplaceable to them. When Mr. de Winter arrives with his new bride, she is met with a coldness that seems impossible to break. Not only do the people not accept her, but Manderley doesn't accept her. Everywhere there are signs of Rebecca, her bedroom which is kept exactly the way it was when she died, the monogrammed desk supplies in the office, the mysterious boathouse that she is not allowed to go in to. Manderley is so much a part of the film that it too becomes a character. You can almost feel the house breathing, pushing this newcomer, this intruder out of its rooms. It is inexplicably tied up with Rebecca and cannot be separated from her. It is as if when Rebecca died she became Manderley (the only other house I can think of that feels like a character is Downton Abbey). 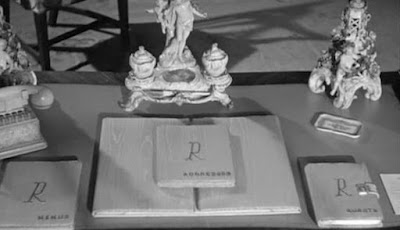 Not only is the house against her but it's housekeeper, Mrs. Danvers, portrayed with an intense and chilling creepiness by Judith Anderson, is also against her, doing everything she can to make her miserable, constantly reminding her that she is NOT the mistress of the house, nor is she a fit wife and companion for Mr. de Winter. Mrs. Danvers love for Rebecca and her hatred for Fontaine comes out in these exchanges:

Mrs. Danvers: You wouldn't think she'd been gone so long, would you? Sometimes, when I walk along the corridor, I fancy I hear her just behind me. That quick light step, I couldn't mistake it anywhere. It's not only in this room, it's in all the rooms in the house. I can almost hear it now. [Looks at Fontaine] Do you think the dead come back and watch the living? Sometimes, I wonder if she doesn't come back here to Manderley, to watch you and Mr. de Winter together. 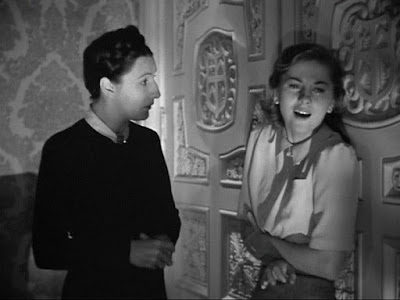 Mrs. Danvers: [as Fontaine runs into the room] I watched you go down just as I watched her a year ago. Even in the same dress you couldn't compare.

Fontaine: You knew it! You knew that she wore it, and yet you deliberately suggested I wear it. Why do you hate me? What have I done to you that you should ever hate me so?

Mrs. Danvers: You tried to take her place. You let him marry you. I've seen his face - his eyes. They're the same as those first weeks after she died. I used to listen to him, walking up and down, up and down, all night long, night after night, thinking of her, suffering torture because he lost her!

Mrs. Danvers: [moving towards her] You thought you could be Mrs. de Winter, live in her house, walk in her steps, take the things that were hers! But she's too strong for you. You can't fight her - no one ever got the better of her. Never, never. She was beaten in the end, but it wasn't a man, it wasn't a woman. It was the sea! 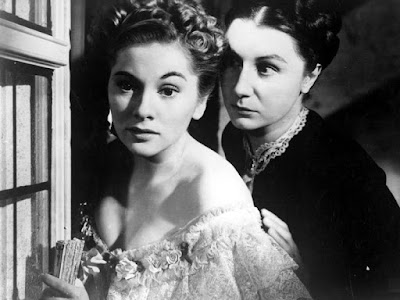 While at first it seems that she is completely losing it, as the true story of Rebecca unfolds, Fontaine's character becomes more sure of herself, culminating in the moment when she tells Mrs. Danvers, "I am Mrs. de Winter now." This is completed when Manderley is burned to the ground, freeing the couple from the ghost of Rebecca once and for all (I don't want to go into too much detail and spoil the film for those who haven't yet seen it). 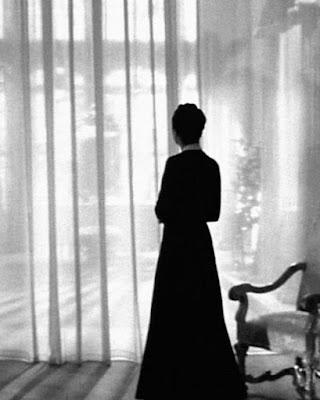 The film won the Academy Award for Best Picture. Fontaine was nominated as Best Actress but lost to Ginger Rogers for her role in Kitty Foyle. The following year she won an Oscar for Suspicion, her second film with Hitchcock. Many believe that it was really for Rebecca that she won. The film also won Best black and white Cinematography and was nominated for Best Actor (Olivier), Best Supporting Actress (Judith Anderson), Best Director (Hitchcock lost to John Ford for The Grapes of Wrath), and Best Screenplay, Art Direction, Editing, Special Effects, and Original Score (Franz Waxman). And if Rebecca had been a real person she would have won an award as well. 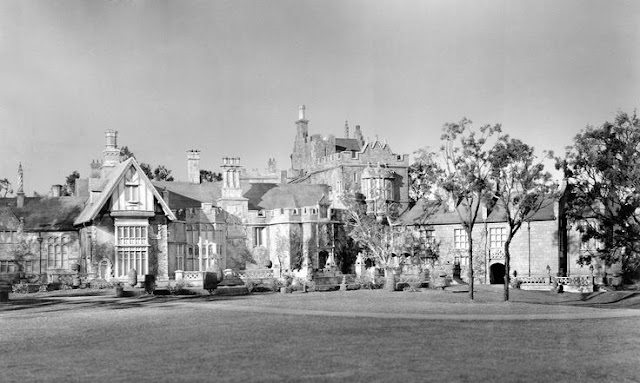 Manderley in all it's Gothic glory.
This post is part of the Criterion Blogathon hosted by Criterion Blues, Speakeasy, and Silver Screenings. Click here to see the full breakdown for the week and be sure to read the other posts (not all 200 of course).
Day 1 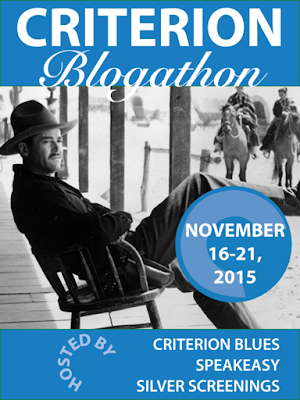