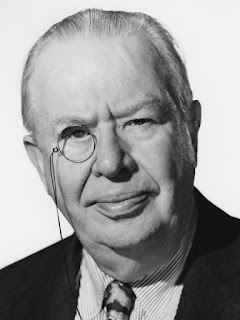 Charles Coburn has become one of my favorite character actors ever since I saw him in The More the Merrier. He is definitely a scene stealer in that movie and won his first Oscar for his role as a business executive playing matchmaker to Jean Arthur and Joel McCrea. If you haven't seen the film yet I highly suggest you order a copy immediately.

Charles Coburn is a scene stealer in most of the films I've seen him in. He is also one of the few character actors to receive star billing in some of his films. He appeared in 70 films and was in numerous television shows, as well as continuing in theatre, which he began in 1901 at the age of 24. He did not get into movies however, until after the death of his wife, Ivah Wills (who appeared in many plays with him and with whom he had six children) in 1937 (he had appeared in two films before that but did not sign a contract until after her death). For a man who didn't start making films until he was 60 and who worked until his death in 1961 at the age of 86, his filmography is very impressive. Read a brief biography of him here. 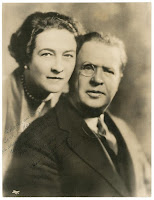 Known for wearing a monocle (which corrected an eye deficiency - "No point having two window panes where one will do"), and being a well spoken Southern gentlemen, he was usually cast as a man of wealth and importance, whether it be as Judge, Doctor, Captain, Lord, General, Colonel, Professor, Sir, Chancellor, Inspector, Mayor, or Father. He also played the gruff but kindly uncles, fathers, and grandfathers. In Movie Stars of the '40s: A Complete Reference Guide for the Film Historian or Trivia Buff, he is described as one "who could be delightfully droll, devilishly sly, or downright dangerous."

He always seems as though the part were made for him, as though he were there and not even thinking of acting - which of course demands the best and only true thinking about acting.

And now to highlight some of my favorite of his film appearances: 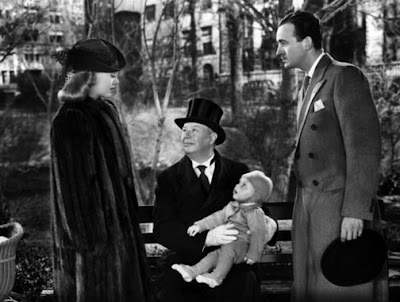 In Bachelor Mother (1939), Coburn plays the father of David Niven, who is friends with an unwed mother (Ginger Rogers) that works at his store. The truth is though that the baby isn't actually hers. She had witnessed the baby being left on the doorstep of an orphanage and, going over to it and picking it up, was caught holding it when the people working at the orphanage opened the door. No one will believe her story of course, leaving her stuck with the baby. When Charles Coburn finds out about it, he thinks it is his grandson, and is so happy that he finally has an heir that he won't listen to anyone's story that contradicts the one he wants to believe. Coburn's scenes with the baby are wonderful and sprinkled with great lines like, "I don't care who the father is, I'm the grandfather!" and "Is there something I can do?" (Rogers), "You've done it!" (Coburn holding baby). There's a great scene near the end where both Niven and Rogers get someone to pretend he is the father of the child, and not Niven. The problem is they both bring him to see Coburn at the same time. Coburn merely smiles in contentment, believing even more that the child is his grandson. You can read more about the film here.

Bachelor Mother will be airing on TCM December 24 at 10:30am EST. 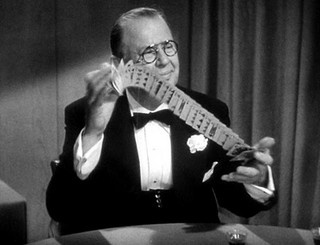 The Lady Eve (1941) finds Coburn as a cardsharp father to Barbara Stanwyck. Their target: Henry Fonda. Stanwyck really dominates this picture but Coburn has some memorable lines. You can read more about the film here. Also, watch the TCM The Essentials Intro here.


Don't be vulgar, Jean. Let us be crooked, but never common.
Ah, there you are. Well, it certainly took you long
enough to come back in the same outfit. 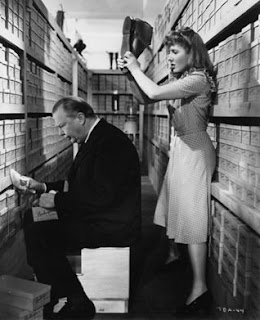 The Devil and Miss Jones (1941) has another great performance by Coburn. From TCM: "John P. Merrick, the world's richest man, goes undercover when employees organize for better wages and working conditions at a department store which he owns. Posing as a lowly shoe clerk, he is befriended by fellow clerk Mary (Jean Arthur) and her boyfriend Joe (Robert Cummings), a labor organizer who has just been fired. He also finds a romantic interest in Elizabeth (Spring Byington), a middle-aged employee in the same department. Although initially his goal is to root out the employees behind the unrest at work, his new friends and his firsthand experience as a worker mistreated by management precipitate a change of heart." Coburn does a magnificent job making the "crusty millionaire J. P. Merrick lovable without resorting to excessive sentimentality [and] is a mark of his skill as a comic actor." Coburn received his first Oscar nomination in the Best Supporting Actor category. The film also has the great character actors Edmund Gwenn and S.Z. Sakall among its cast. You can read more about the film here. 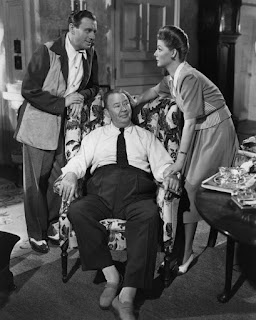 George Washington Slept Here (1942) stars Jack Benny and Ann Sheridan as a husband and wife who have just purchased a somewhat ramshackle home (the house from Arsenic and Old Lace) that, as the title states, was one of the many places where George Washington slept during the Revolutionary War. Coburn plays Sheridan's rich Uncle Stanley, comes to visit them in their new home. When they ask him for money towards fixing up the house, he confesses that he isn't actually rich and just pretended to be so that his relatives would be nice to him! You can read more about the film here and here.

The More the Merrier (1943) is, as mentioned above, Coburn's best role, hence the Oscar. My favorite moment in the film is when he and McCrea are going back to their apartment, which they share with Arthur due to the housing shortage in Washington DC, after sunbathing on the roof. Coburn pretends to shoot some kids with a machine gun, and they pretend to  die by falling off the wall they are sitting on. It looks so natural, as if it were unscripted. You can't help but think that Coburn would make an awesome grandpa. 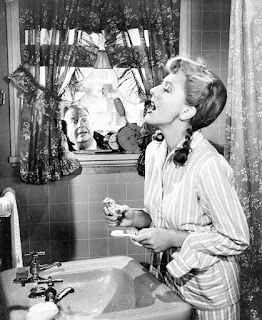 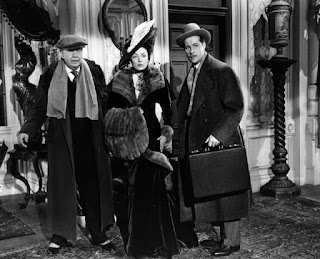 In Heaven Can Wait (1943), Coburn plays the grandfather of Don Ameche, a spoiled rich kid turned skirt chaser. Coburn realizes that his grandson is very much like him and helps him steal his cousin Albert's fiancée (Gene Tierney) and, when the marriage gets a little shaky, to win back his wife. You can read more about the film here.


Albert, I'm struggling successfully against the gout, I'm waging a terrific battle with my liver, and I'm holding my own against asthma, but I doubt if I have strength enough to survive your jokes. You're a successful lawyer. Let it go at that.

Heaven Can Wait will be airing on TCM December 12 at 10pm EST. You can also watch it here.

Princess O'Rourke (1943) is about a princess (Olivia de Havilland) visiting America and falling in love with an airline pilot (Robert Cummings). Coburn is her uncle who is trying to help her find a husband that she can produce a male heir. When he discovers that she has fallen in love with a commoner, he begins to find out all he can about this young man. When he discovers that Cummings comes from a family of nine boys, and his father "one of eleven," he calls the king and gets permission for de Havilland and Cummings to marry. The best scene is when Coburn talks to de Havilland about the possibility of her marrying an American (he hasn't told her yet that he knows about Cummings and has already received the king's approval). You can read more about the film here.


"One of nine boys. Extraordinary. His father one of eleven!" 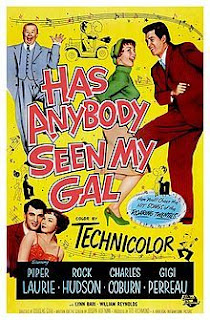 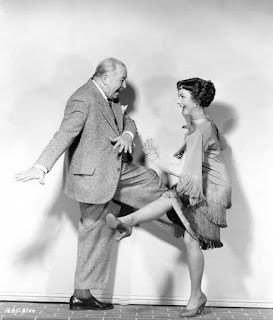 Has Anybody Seen My Gal (1952) has Rock Hudson and Piper Laurie top-billed but the film definitely belongs to Coburn. He has decided that when he dies he wants to leave his fortune to the daughter and grandchildren of the woman he almost married in his youth. He moves in with the family and has the check delivered anonymously to see how they react. He is a delight to watch the entire film. Where else can you see Coburn dance like this?!

You can watch the film here (look for a brief appearance by James Dean around the 30 min. mark)! 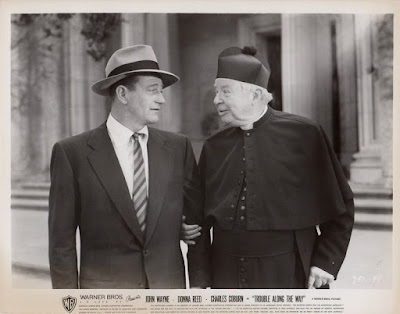 In Trouble Along the Way (1953) Coburn is Father Burke, the head of a financially failing, all-male university. He decides to hire John Wayne, a once famous coach with a problem of his own, to build up the football team and therefore increase enrollment. Due to script differences between Wayne and the director, the film did not do well at the box office. Coburn's performance however, as the ever optimistic priest makes the film worth watching. The film also stars Donna Reed as a social worker and Sherry Jackson (Make Room For Daddy) as Wayne's daughter. 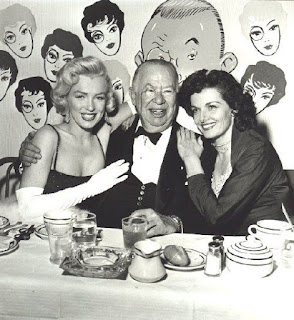 In Gentlemen Prefer Blondes (1953), starring Marilyn Monroe and Jane Russell, Coburn plays Sir Francis "Piggy" Beekman, a role completely different from Father Burke. He owns a diamond mine, and Lorelei (Monroe) just loves diamonds. They are caught alone in a cabin together by the detective Lorelei's fiancée hired to keep an eye on her. You can read more about it here and here.

Gentlemen Prefer Blondes will be airing on TCM December 21 at 8pm EST.

Colonel Effingham's Raid (1946) - Charles Coburn (lead role) & Joan Bennett. "As the star of Colonel Effingham's Raid he [Coburn] got to display more range than usual, grandly expounding in the scenes in which he celebrates his military heritage but also showing a more vulnerable side when he thinks he's lost the battle." You can read about it here. 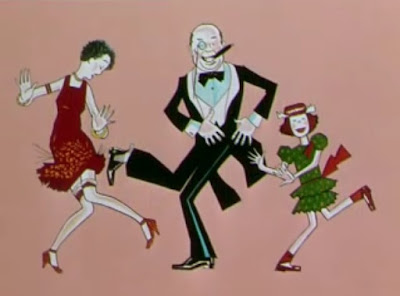 This post is part of the annual What a Character! Blogathon hosted by Once Upon a Screen, Outspoken & Freckled, and Paula's Cinema Club. The Blogathon has been moved to next weekend but I am posting mine early. Be sure and check out the other entries celebrating these great actors and actresses without whom movies could not be made. 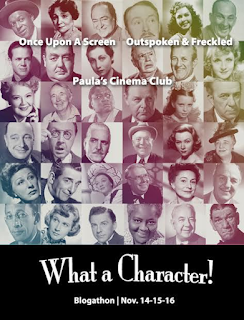