Have Yourself a Movie Little Christmas: A Book Review

Have Yourself a Movie Little Christmas by Alonso Duralde not only lists just about every movie connected with Christmas, but also informs the reader which ones are worth viewing and which ones aren't. 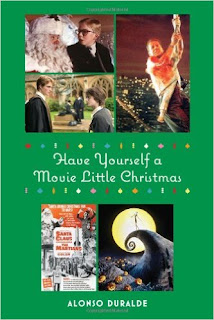 The book is divided into 9 chapters and covers films from the dawn of sound up to the present (published in 2010). There is also an appendix that lists even more films not individually covered, with asterisks by the best ones (as a film in general, not as a Christmas movie). Here are the chapters:

Each of the films covered in the chapters lists the rating, running time, writers and director, primary actors, and studio along with a brief description and fun facts (did you know that that's the real Macy's Thanksgiving Day Parade in Miracle on 34th Street and that Edmund Gwenn really played Santa for it? Also, in the part with the little Dutch girl, she tells Santa that she doesn't want anything for Christmas as being adopted by her new mother is gift enough). Animated films are also included. After the Appendix is an Index of Names, so that you can easily find a holiday film with your favorite actors, and an Index of Titles.

This is a great resource and would make a great gift for the film buff in your family, whether they like new films or old.
Posted by Phyl at 4:12 PM