We watch them every year but aside from Frank Capra's It's a Wonderful Life (and probably Michael Curtiz's White Chirstmas and Ernst Lubitsch's The Shop Around the Corner), you may not notice or recognize the director of your favorite Christmas films. In this post I am going to tell you who directed each of the most famous Christmas films and what other major films they directed. *This is not a complete list of Christmas films, just some of the better known or my personal favorites.

As I already mentioned, Capra and Curtiz need no introduction, but did you know the director of Christmas in Connecticut (1945) was Peter Godfrey? I certainly didn't recognize his name. I looked him up and discovered he was London born and directed two other great Stanwyck films (which I will be looking at for the Barbara Stanwyck Blogathon later this month) The Two Mrs. Carrolls (1947)and Cry Wolf (1947).

George Seaton directed the much loved Miracle on 34th Street (1947) but did you know he also directed The Country Girl (1954)? He also directed 36 Hours (1964), a James Garner film I discovered this year.

Holiday Affair (1949) is one of the lesser known holiday films starring Robert Mitchum and Janet Leigh. It was directed by Don Hartman. He only directed five films total, but was the writer of many popular films, including quite a few for Bob Hope.

Remember the Night (1940), another Stanwyck film, was written by Preston Sturges but directed by Mitchell Leisen. His 50 credits include a couple Lombard films, Midnight (1939), and many other romantic comedies. 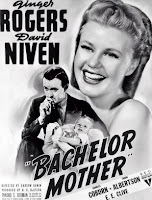 Lastly, Holiday Inn (1942), which introduced perhaps the most popular Christmas song of all time, "White Christmas," was directed by Mark Sandrich, who has 76 credits beginning in 1926 and ending in 1946 (his death). His name will be familiar to all who love the Astaire/Rogers films.