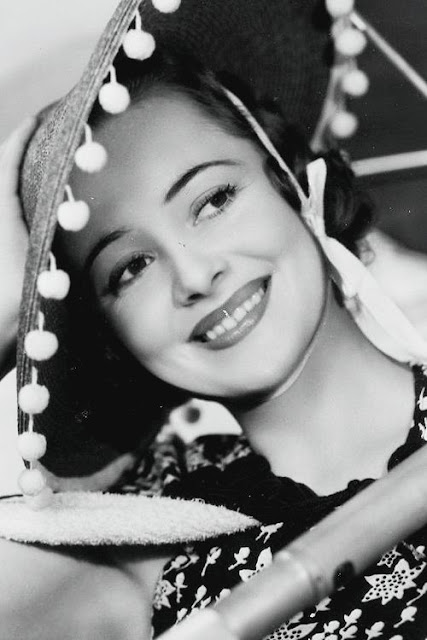 My favorite photo of Olivia

Everyone's journey with Olivia de Havilland starts somewhere. For most it's her role as Melanie in Gone With the Wind (1939). Mine began when I was little. My dad was watching The Adventures of Robin Hood (1938) on the old square tv. It was the scene where Robin Hood visits Maid Marion in her castle room. I wasn't much on the guy at the time - I've never been a fan of long hair on men - but Maid Marion, with her shining brown eyes, long thick braids, and shimmering blue dress definitely left a mark on me. She was the most beautiful woman I had ever seen and I wished I looked just like her.

In the years following (and pre-internet at my house), I wondered what version of Robin Hood my dad had been watching and who that lady was who played Maid Marion so well (even better than the fox Maid Marion in my favorite Disney film).

Fast-forward to the year 2012. I was watching You've Got Mail on dvd for the first time (after seeing it countless times on television - though usually it was just the ending). After it was over, and with "Over the Rainbow" still playing in my head, I checked out the special features. One of them was titled "You've Got Chemistry" and it introduced me to many on-screen couples I would soon come to know and love. I already knew and loved Mickey and Judy (and of course Hanks and Ryan from the feature film). New-to-me couples included Bogie and Bacall, Powell and Loy, and lastly Olivia de Havilland and Errol Flynn. As I watched clips from their eight films together, scenes from their most famous pairing in The Adventures of Robin Hood let me know that I had finally found my childhood Maid Marion. 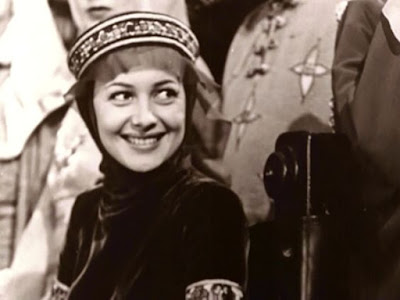 Over the next year I acquainted myself Powell and Loy as Nick and Nora and the sizzling on-screen love affair between Bogie and Bacall. Then, in 2014 we finally got Turner Classic Movies and I recalled that last couple I had yet to delve in to.

April 5, 2014 - I watched They Died with Their Boots on (1941), my first Flynn/de Havilland film and their last pairing. They were instantly a new favorite (and last year's post for the blogathon as well as the subject for one of my Cinema Wedding Gown posts). Three days later I watched The Adventures of Robin Hood in it's entirety for the first time, in all its Technicolor splendor. It far exceeded my expectations. Rather than feel dated, it leapt off the screen, as fresh and vibrant as if it had been filmed the day before. Olivia de Havilland was everything that Maid Marion should be: beautiful, smart, strong-minded, principled, courageous, and did I forget to mention gorgeous?

The next film I watched with one of these newly discovered stars was The Sea Hawk (1940) starring Errol Flynn and, in the lead female role, Brenda Marshall. If I could remake any classic film, I would remake this one with Olivia in the lead (and a more substantially part of course). Olivia never needed the hero, rather, he needed her.

After that was The Private Lives of Elizabeth and Essex (1939) with Errol Flynn, Bette Davis, and in a tiny part, Olivia. It pained me when Errol and Olivia didn't end up together. It just didn't feel right, like something was terribly wrong in the world! It was the same with The Charge of the Light Brigade (1936), which aired on TCM a few days later.

In between those two films, I saw my first Olivia film without Errol, My Love Came Back (1940). And while it seemed wrong for her to love someone other than Flynn, it instantly became a favorite. Olivia, being the fantastic actress that she is, is very convincing as a violinist. Not to mention she can get a man to ask her to dance all the while acting like she's not interested but will oblige him anyway.

Last year started off with her Oscar-winning performance in The Heiress (1949), Gone With the Wind (1939) for the first time in its entirety, and My Cousin Rachel (1952) - three powerful performances.

I was therefore extremely excited when Olivia was named the Star of the Month for July on TCM, especially since I was hosting a blogathon in celebration of her 100 years here on earth. Her birthday being on the first of the month couldn't have been more ideal as, while reading all of the posts, I was able to decide which films I HAD to watch. As it turned out, I wanted to watch every one of them.

There are still several I have yet to see (I didn't have room on the dvr last year to record all of the great films they showed. In fact, I had to make a list of the ones I could get from the library). I finally watched Hush... Hush, Sweet Charlotte (1964) this year after finishing Feud: Bette and Joan. I will definitely be recording Anthony Adverse (1936) next Saturday and hope to actually get around to checking out some others from the library. I also need to make a new Top Ten List of her films, as I've seen so many more great Olivia movies since I originally published it.

The fact that Olivia is still with us and turned 101 today is a gift indeed to the Classic Movie Fan. I hear her goal is 110 and I plan on hosting a blogathon every year to celebrate her amazing body of work and her continued impact on people's lives.

This post is for the blogathon I am co-hosting with In the Good Old Days of Classic Hollywood. Here's hopefully to many more blogathons. 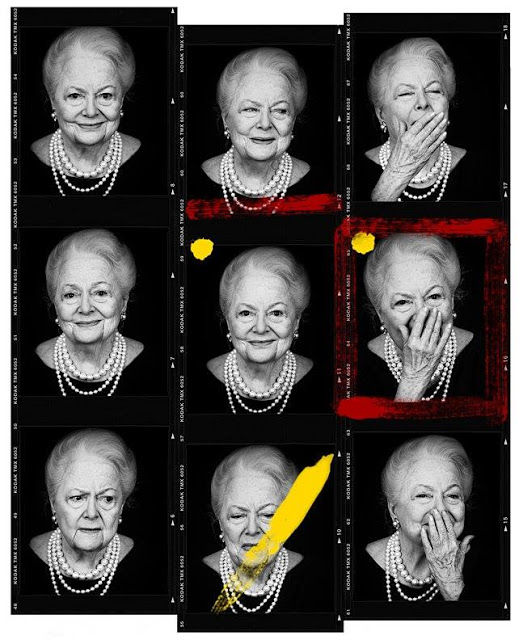