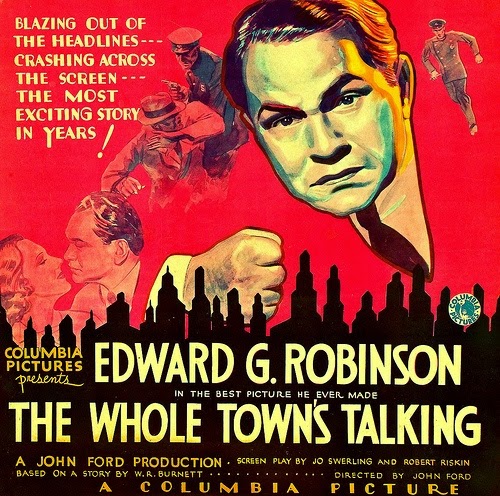 I just discovered why I like this movie so much: the script is by Robert Riskin. He wrote the screenplays for both Platinum Blonde (1931) and Magic Town (1947), both of which I have written about, as well as numerous Frank Capra films. The following film however, was directed by the great John Ford, famous for his long-time film partnership with John Wayne. 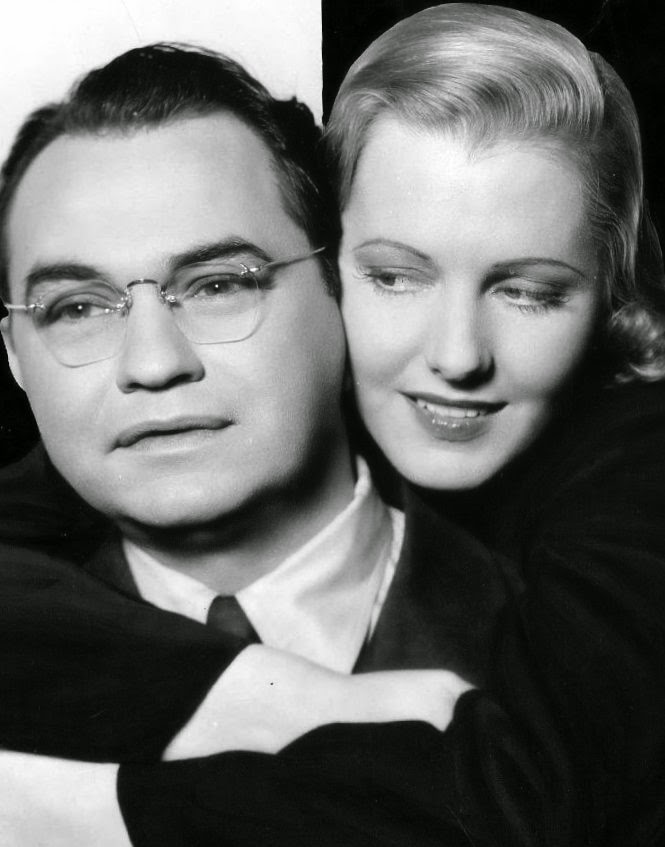 The Whole Town's Talking was released in February of 1935, over 80 years ago! It featured two of the biggest stars of the decade: Edward G. Robinson and Jean Arthur. Robinson plays a dual role in this film, which has been sort of a theme here at Phyllis Loves Classic Movies this month. One of the roles he plays is that of a gangster named "Killer" Manion - no surprise there. The other is Arthur Ferguson Jones, a meek and shy office worker who is never late for work and who does the same thing every day. He wakes up at the same time, feeds his cat Abelard, feeds his bird Heloise, draws a bath... you get the picture. However, today is the day that his life changes. Due to get a raise for his punctuality, he is late for the first time in his life and almost gets fired. His long record of loyalty and dedication to his job works in his favor and he is allowed to stay - but no raise. One of his co-workers, "Bill" Clark (played by Arthur) - the girl he secretly loves - gets fired instead for taking up for him. However, in true Jean Arthur fashion, she doesn't seem to mind. 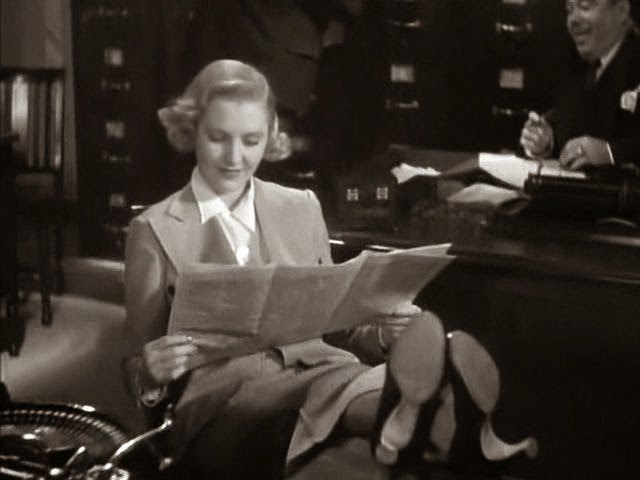 While cleaning out her desk, she happens to see a picture of Public Enemy #1 in the newspaper. He looks just like Jonesy! 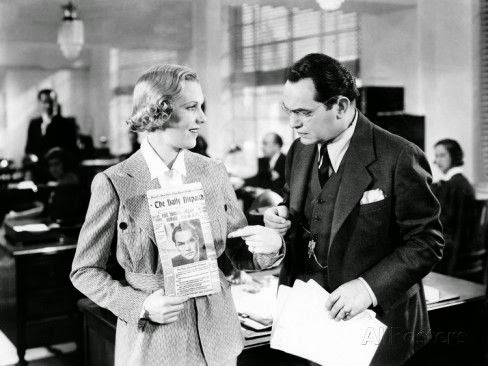 The two go out to lunch together. While there, an upright citizen, played by Donald Meek, notices Jones, whom he thinks is "Killer" Manion, performs his duty and calls the police (there also just happens to be a reward). Within minutes the place is surrounded and Jones is hauled off to the city jail. 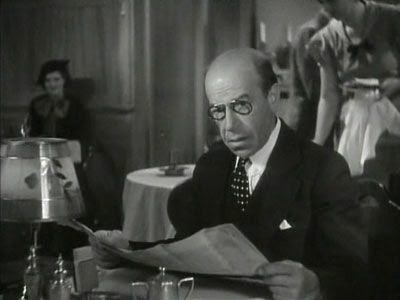 Jones and Clark insist that this is all a big mistake, but to no avail. Finally, Jones' boss comes down and identifies him. Since he looks so much like the gangster, Jones is given a special "Police Protection" pass to show the police if he is picked up again. The story of the gangster look-alike is printed in the local paper and "Killer" Manion finds out about Jones and his special, not to mention convenient, pass.
Seeing the publicity in this, Jones' boss has him write up a series of newspaper articles of his views on Manion. Jones agrees, but only is Miss Clark is put back on the payroll. Maybe looking like a gangster isn't so bad after all...
When Jones returns to his apartment later in the evening, a surprise awaits him. 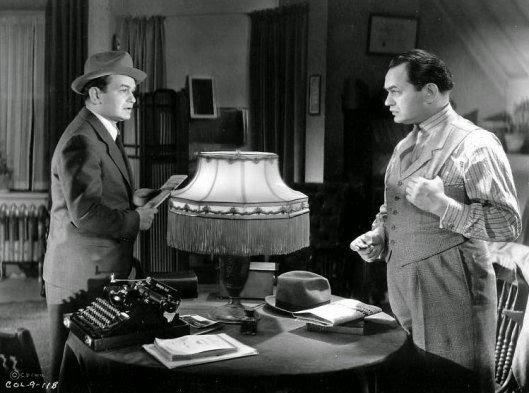 Manion, being a ruthless gangster, comes up with the perfect plan. During the day, while Jones is at work, Manion will stay in Jones' apartment. At night, when Jones comes home, Manion will take his pass and go commit more crimes while being protected from the police. Jones can do nothing but agree. Unfortunately, he also has to agree to write his newspaper articles as dictated by Manion, leading many to be suspicious that Jones is lying about his identity. 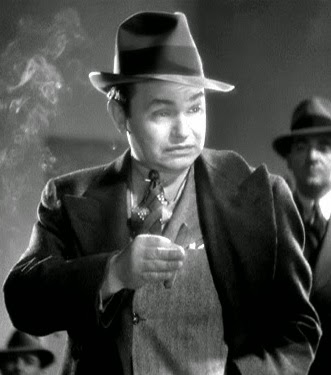 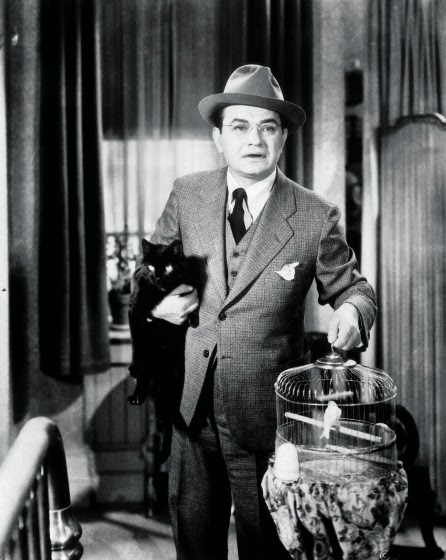 The film ends with a showdown between the two characters. Manion sends his men to go kill Jones, who then unexpectedly shows up at their hideout. Manion's men think Jones is Manion and he tells them to let Jones go free. This final scene is extremely interesting to watch as Robinson has to play a meek guy pretending to be a gangster. He pulls it off brilliantly. His performance is so convincing in this movie that you really do see Robinson as two separate men. That alone makes this film worth watching.  Add Jean Arthur, a great supporting cast, and a witty script and you have cinema gold! 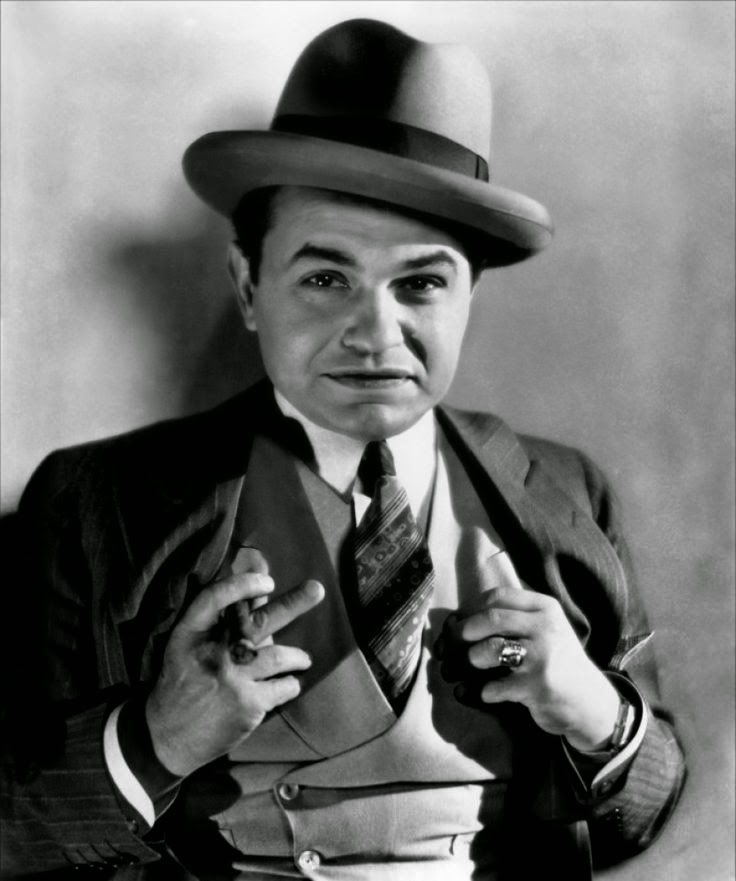 With growing indignity surrounding the perceived vulgarity of gangster movies, it was only due to its comedy content that the film avoided falling foul of the code William Hays drew up to enforce prohibition on subversive content in film — the principles of which went on to govern film narrative in Hollywood at the time. ~ source

There is one glaring goof in the picture. At the beginning of the movie, Jones starts the tub water running. When he realized he is late for work, he rushes from the apartment, and there is a close-up of the overflowing bathtub. When Jones returns from work, the water is not running and there is no "flood" like you are led to expect.

Make sure you read Silver Screenings post from 2013 on the Dual Edward!

All images found via Pinterest
Posted by Phyl at 6:37 PM