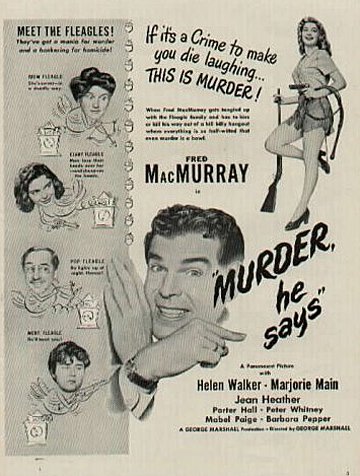 Today's post for the Movie Scientist Blogathon is another, earlier, MacMurray film, Murder, He Says (1945). I caught this "dark comedy" on TCM in January, as Fred MacMurray was the Star of the Month.
The main difference is that MacMurray is not the scientist this time. He is a pollster, that is, he goes around in the less populated areas and polls the people in the area on what appliances they own. In the case of this film Pete Marshall, MacMurray's character, is looking for a fellow pollster who disappeared in the area.
I'm with the Trotter Poll. We're like the Gallop Poll but not as fast.
By doing some questioning at the general store, he finds out that his friend was last seen going to the Fleagle's, a family that everyone seems to be afraid of. Dusk is falling as he makes his way on his bicycle to the Fleagle homestead. He becomes unnerved after seeing a glow-in-the-dark dog running through the woods. Next thing he knows, he has fallen into a large hole. One of the Fleagle boys comes along but instead of helping him out of the hole tries to push him in! When another member of the family comes along and has him come up to the house. 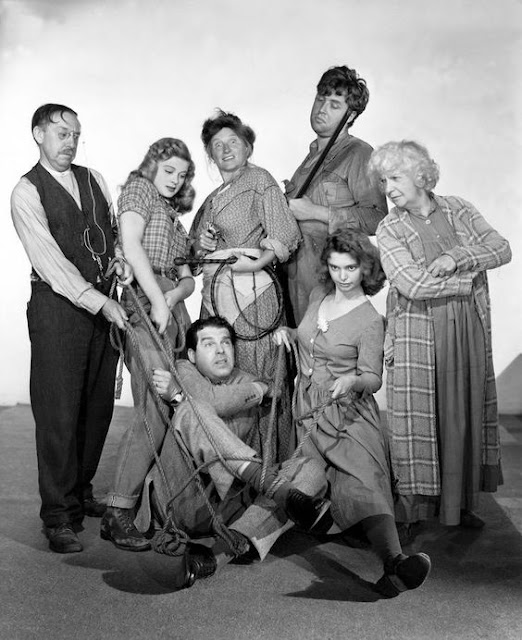 The Fleagle gang consists of whip-totin' Ma Johnson (Marjorie Main), the twins Mert and Bert - Bert has the crick in his back (both played by Peter Whitney), Ma's latest husband Mr. Johnson - a cooky scientist (Porter Hall), and Elany - who goes around singing the sensless rhyme "Honors flysis/Income beezis/Onches nobis/Inob keesis"(Jean Heather). Pete is also introduced/forced to meet Grandma (Mabel Paige). Grandma glows in the dark, just like the dog Pete saw in the woods. She tells him that her family has poisoned her and that before she dies she wants to tell a secret - the whereabouts of a stash of stolen money totaling $70,000. 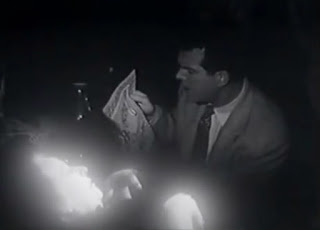 Glowing Grandma
Once they are alone, Grandma gives Pete a sampler with some music notes stitched on it. She tells him to give the sampler to Bonnie; she will know what it means. Bonnie Fleagle is the one who stole the money from a bank. 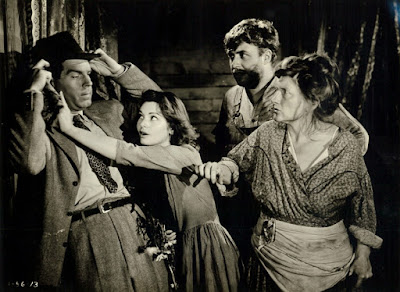 Grandma dies a few minutes later and the Fleagles set to work to try and get Pete to spill where the money is hidden. He keeps telling them the secret is in the sampler but they don't believe him so he has to make something up. He tries to fool them but doesn't get away with it. 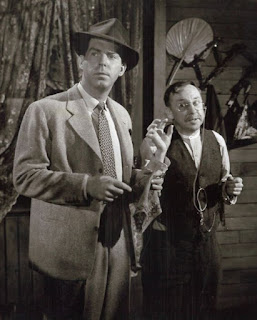 Pete and Mr. Johnson, the inventer of the glow-in-the-dark poison.
Later, cousin Bonnie shows up - only she's not really cousin Bonnie but Claire Matthews (Helen Walker), daughter of the bank teller who was blamed for the holdup. She reveals herself to Pete and asks for him to help her clear her father's name by finding the money. Being a nice guy and not wanting to leave her to the ruthless Fleagles, Pete agrees to stay. 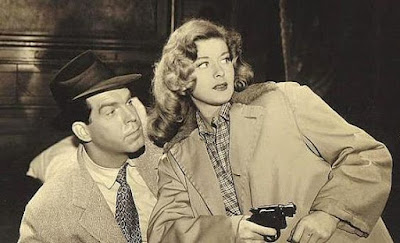 Pete and Claire/Bonnie try everything they can think of to find where the money is hidden. Pete tries playing the melody from the sampler on the organ in the hopes that a trap door will open, like in that Bob Hope picture The Ghost Breakers (1940). 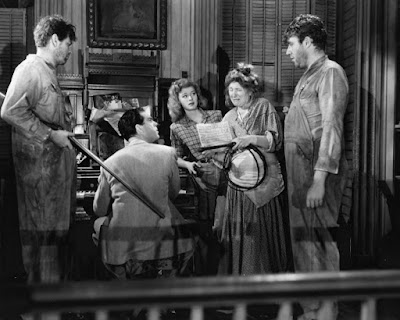 There are some hilarious scenes in this film. In one the family has sat down to eat some grits and gravy. Pete realizes that Bonnie's plate is poisoned and keeps turning the lazy-susan table until nobody knows who has the poisoned plate. When Pete blows out the lamp, all of the plates but Mr. Johnson's are glowing. 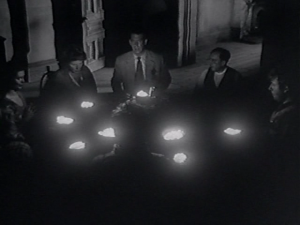 Another funny scene is when Pete pretends to be able to see and talk to the ghost of Hector P. Smedley, the pollster man that the Fleagle's murdered. Mert and Bert are terrified when the ghost "chases" them through the house.
The most hilarious scene, which could only be pulled off by someone with MacMurray's comedic talent and timing, is when someone knocks out one of the twins in the potato bin as he is wrestling with Pete, who then has to sit on top of him, pretending that the twin's legs are his own when the real Bonnie (Barbara Pepper) shows up. She has broken out of prison and is also looking for the money. The legs of course are going in ways that Pete's real legs never could and this lends to the comic situation. You can watch the scene below.
With the real Bonnie there it really becomes a race against time (and death) as everyone scrambles to find the money first. 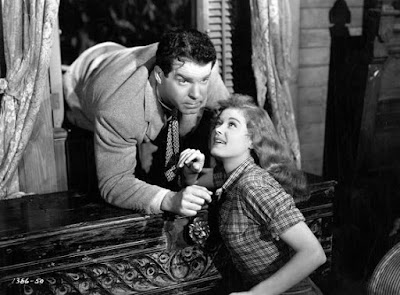 A Few Fun Facts:
Final Thoughts: This movie is definitely "different." You don't know quite what to expect but once you've watched it you are glad you did.
Some more clips
This post is part of the Movie Scientist Blogathon hosted by Christina Wehner and Silver Screenings. See my "Good Scientist" post, The Absent-Minded Professor (1961), from yesterday here. Links to the other entries in the blogathon are below.
The Good | The Mad | The Lonely 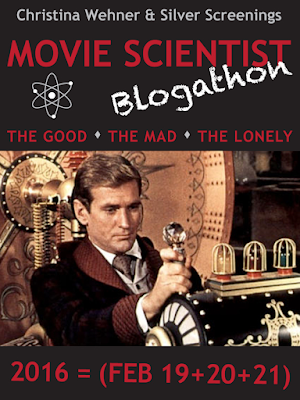