Today's Summer Under the Stars focus is the great Greta Garbo. The film: Ninotchka (1939). 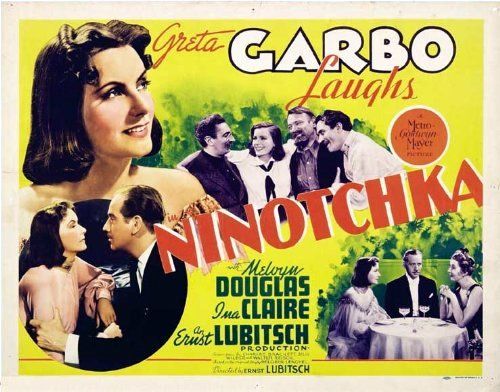 Ninotchka is, according the brief summary on TCM: "A coldhearted Soviet agent is warmed up by a trip to Paris and a night of love." The pitch for the movie was equally short: "Russian girl saturated with Bolshevist ideals goes to fearful, Capitalistic, monopolistic Paris. She meets romance and has an uproarious good time. Capitalism not so bad after all." 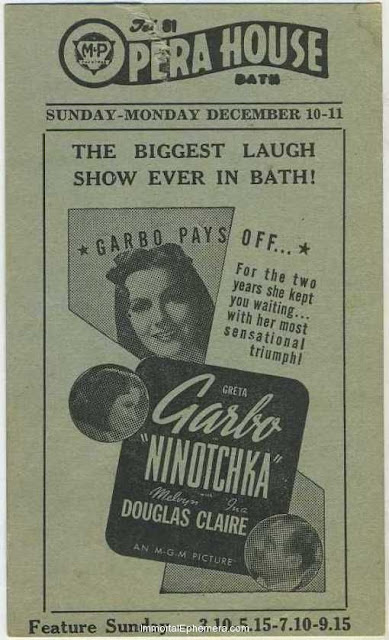 This film was a departure for Garbo, famous for her dramas. The slogan for the film followed the same tactic as Garbo's first talking picture Anna Christie (1930), when it was announced "Garbo talks!" This time it read, "Garbo laughs!" Not only does she laugh, but she makes everyone else laugh with her, as evident in the trailer.


Ninotchka is Garbo's character's name. She is sent from Russia to Paris to investigate a problem that her fellow Russian's are having selling some jewels. Here is the opening shot which sets the tone for the film: 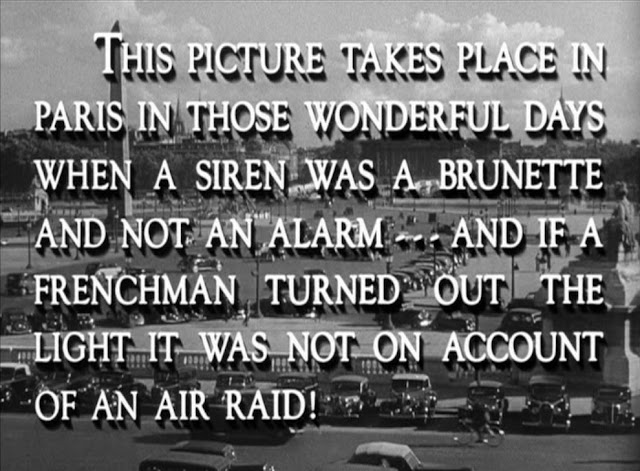 Next shown is three men, obviously Russian, looking at amazement at a swanky Parisian hotel. Despite the great cost, they decide to stay there rather than the cheaper hotel down the street. They take the Royal suite with the excuse that the safe in the suite is the only one large enough to hold the important items that they brought with them. 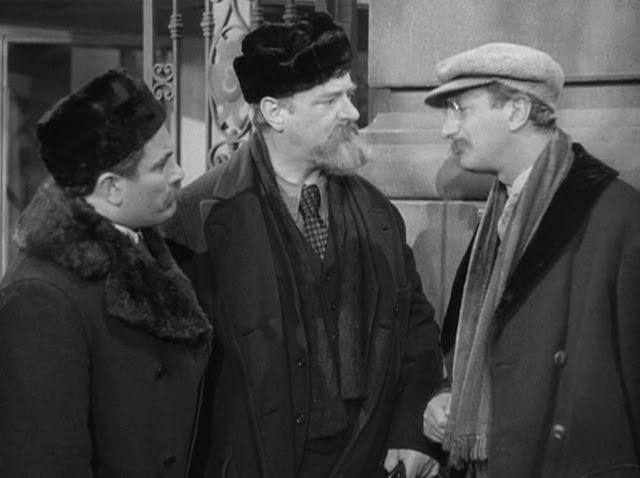 Once in the suite we discover what it is they carry with them: magnificent jewels to be sold so that with the money they can feed their starving Russia. There is a hitch though. The jewels were taken from a former Grand Duchess of Russia (as property of the people) and that certain duchess just happens to be in Paris and a certain Russian hotel waiter just happens to see the jewels and tell the duchess where they are. 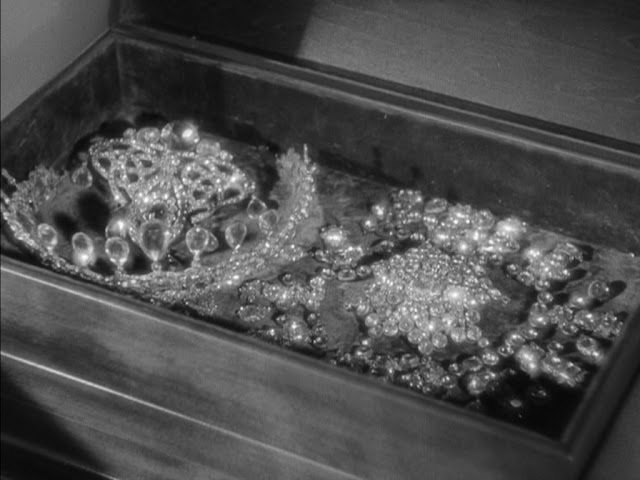 The duchess sends her lover, Count Leon d'Algout (Melvyn Douglas), to see the men. He stops them just as they are about to sell the jewels and informs them that he has filed an injunction. Now they cannot sell the jewels until they are given a clear title. While he's at it, Leon also shows the three Comrades how much fun they can have in a Capitalistic country. 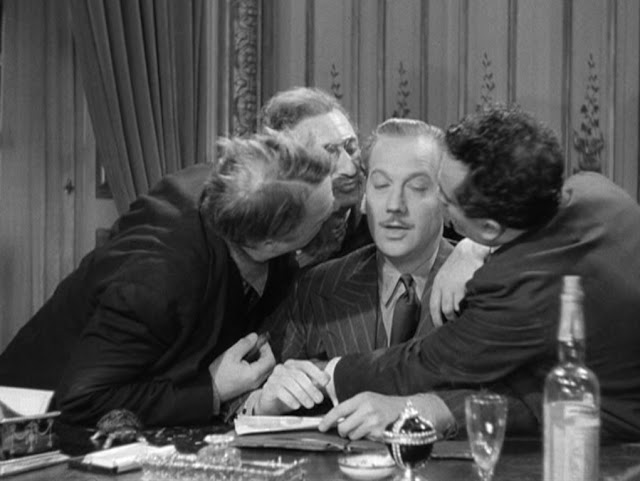 Iranoff, Buljanoff, and Kopalski, after sending a telegram to Russia to inform them of this unfortunate turn of events, go to the station to meet the agent Russia has sent. They are surprised when it turns out to be a woman. One of the men says that had they known, they would have greeted her with flowers. This is Ninotchka's response: 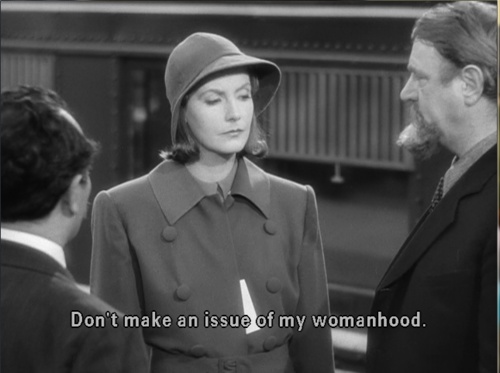 Later, as she is walking about Paris examining it's structures, she meets Leon. A great dialogue follows (the Lubitsch touch): 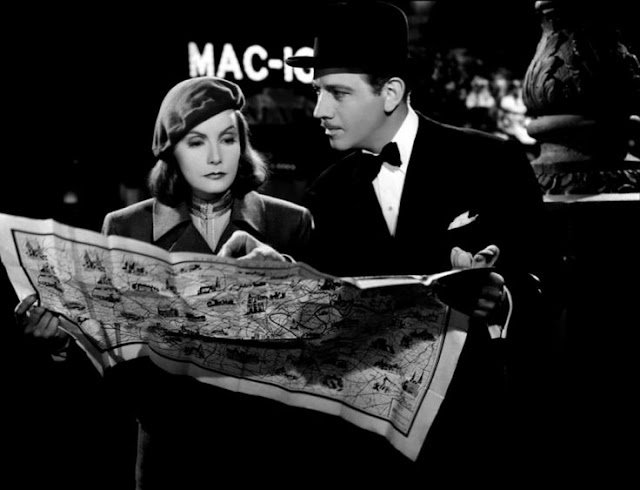 I don't have to but I find it natural.
Suppress it.

The two begin to fall in love. When they discover who each other is however, Ninotchka, who was beginning to thaw out the tiniest bit, tries to ignore Leon, but he won't give up. He follows her into a working man's restaurant and tries to get her to laugh. He finally succeeds in the films most famous scene. 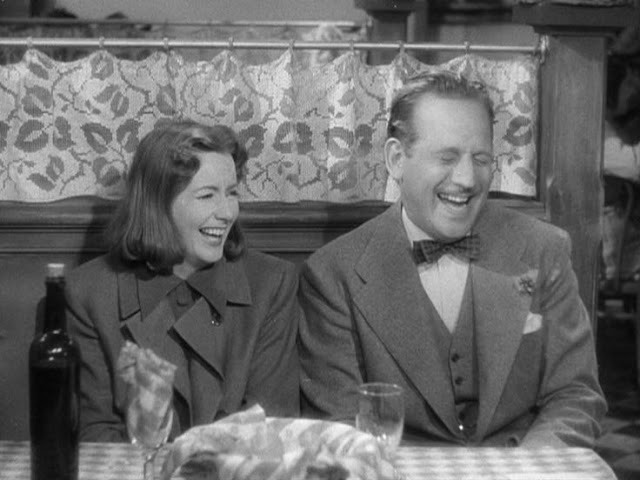 Ninotchka then becomes a different woman. She buys a that she had previously ridiculed with this

great line: "How can such a civilization survive which permits their women to put things like that on their heads. It won't be long now, comrades." Later they go out to dinner. Ninotchka wears a beautiful flowing, sparkly dress. The two become drunk on champagne and go back to the Royal suite (which Iranoff, Buljanoff, and Kopalski had moved out of so that the Russian agent could have the best room while they moved to the "smallest room next to the servants quarters"). Ninotchka opens the safe and Leon places a tiara on her head. She passes out and he puts her on the bed, tiara and all, and leaves. 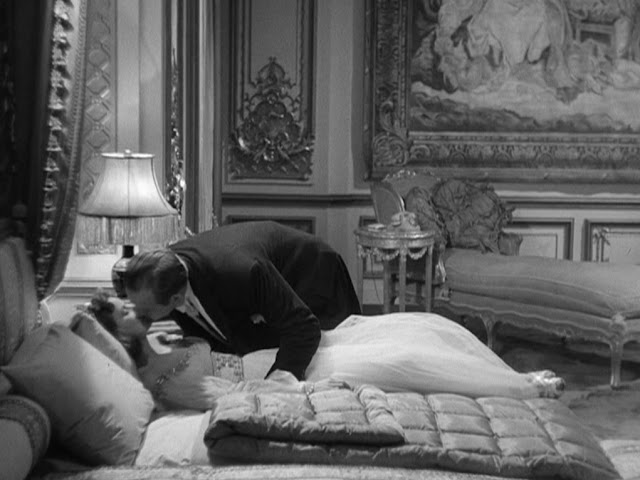 The next morning, Ninotchka is woken by a visit by the Grand Duchess Swana, who has "retrieved" her property while Ninotchka was asleep. She tells her that she will give the jewels back and sign them over to Russia on one condition: Ninotchka leave on the next plane back to Russia. With a heavy heart, Ninotchka complies as her country must come first. 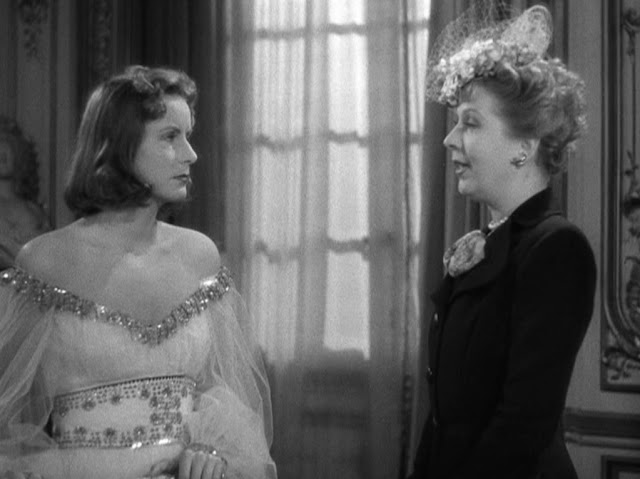 Back in Russia, the difference between it and Paris is starkly visible. There is no privacy in the small room she shares with two other girls and in order to have an omelet she must have her three friends over so that there are enough eggs. While they are "feasting" a letter comes from Leon. It starts out, "Ninotchka my darling" and ends "Yours, Leon." In between is nothing but blotted out words as the entire body of the letter has been censored. 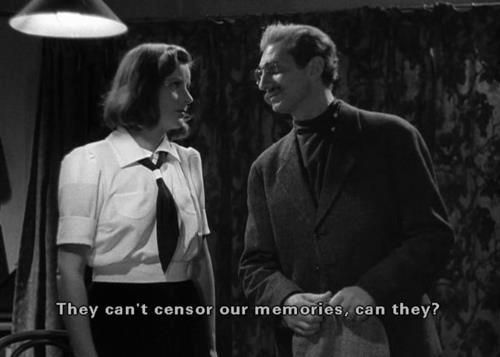 Fast-forward to a few weeks later. Ninotchka is once again sent after Iranoff, Buljanoff, and Kopalski, this time in Constantinople. Upon her arrival (she is greeted with flowers this time) she discovers that they have opened a Russian restaurant and plan on staying there. 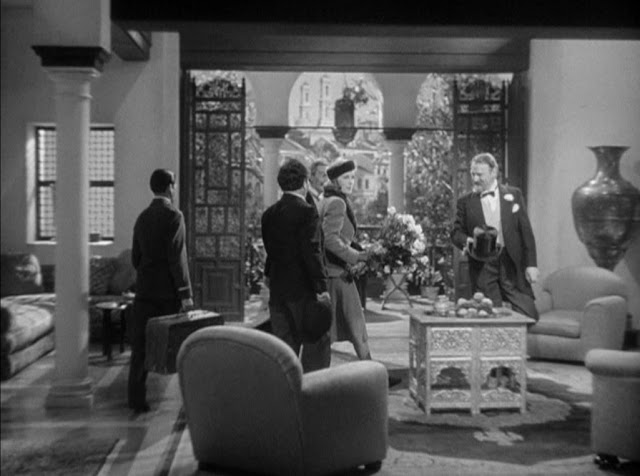 They have another surprise for her too... 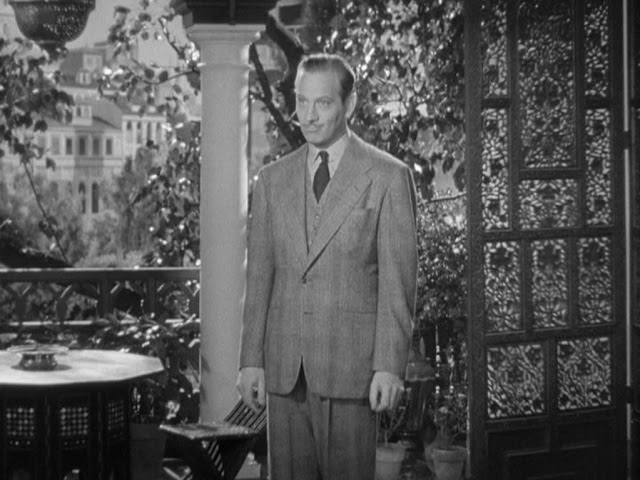 The movie ends typical Hollywood style with Leon convincing Ninotchka to stay with him and sealing it with a kiss. THE END.

Ninotchka is my first Garbo film. I found the first half to be a little slow, though it had some great one-liners. For the second half Garbo suddenly seemed to come to life. I definitely agree with this statement made by Howard Barnes of The New York Herald Tribune: "Now that she has done it, it seems incredible that Greta Garbo never appeared in a comedy before Ninotchka; the great actress reveals a command of comic inflection which fully matches the emotional depth or tragic power of her earlier triumphs." 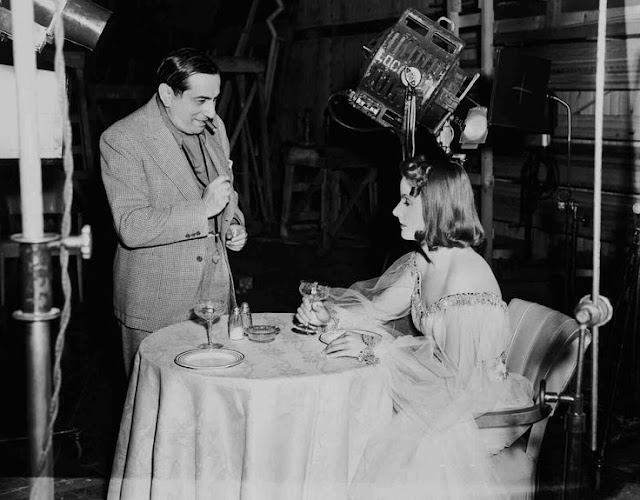 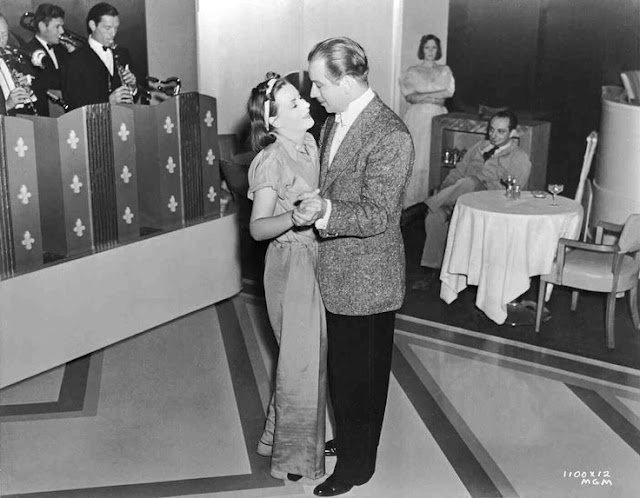 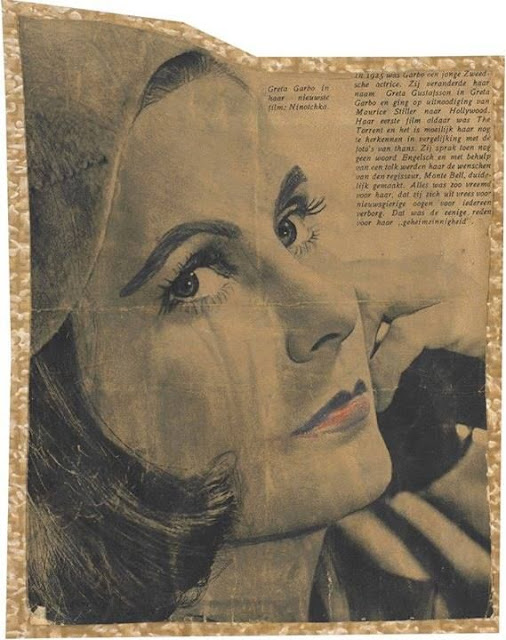 This photo of Greta Garbo was found stuck on the wall of Anne Frank's room.
It was from  ‘Ninotchka.’

Our little room looked very bare at first with nothing on the walls; but thanks to Daddy who had brought my film-star collection and picture postcards on beforehand, and with the aid of a paste pot and brush, I have transformed the walls into one gigantic picture. This makes it look much more cheerful…

This post is part of the 2015 Summer Under the Stars Blogathon hosted by Journeys in Classic Film. Be sure and read all of the other posts on Garbo and the other stars here. 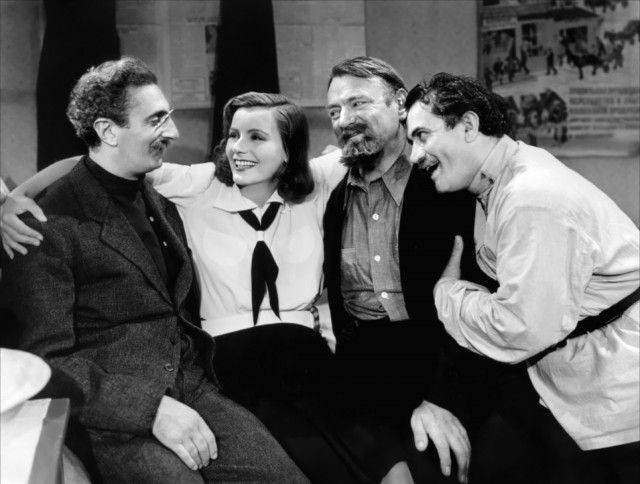